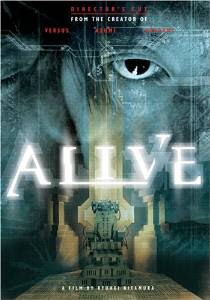 Some movies make it really difficult to remain awake until the end, and this is one such movie. It seemed like an eternity until the final credits of this tedious flick began to roll, and the most eloquent and just statement of quality given by the group of guys that watched this thing with us was the long and particular stinky fart one let out as the final credits ran. (Amazing how fast a group lulled into total lethargy can suddenly come to life again.) 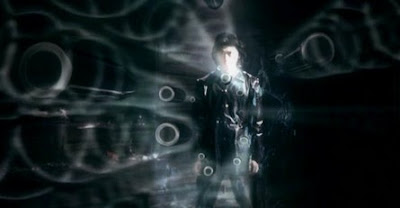 Alive is one of those kinds of films that, in order to make sense or advance the nonsensically ridiculous plot, at any given time some character stands still and pontificates in extreme detail so as to advance a story that would otherwise remain incomprehensible. ("You think you are the only one? Well, in the Northwest corner of Southern Africa, we found an albino Peruvian transgender cow with blue toenails who, after repainting them pink, led us to a stream that went west until it went east and after 130 days, 23 hours, 5 minutes and 59 seconds it ate our housemaid before revealing that if we pull our earlobes while eating peanut butter our penises will develop breasts! That's why...") 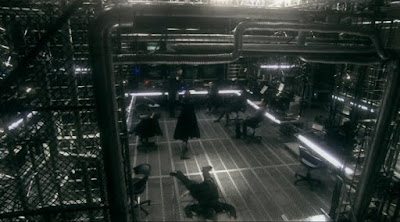 And what is the plot? Well, in what seems to be some dystopian future, some condemned man named Tenshu (Hideo Sakaki), who killed the six rapists of his girlfriend (and supposedly her as well), survives his execution and, like in an anorexic version of Let's Make A Deal, is given the choice of going through Door Number Two or sitting on the chair again. He takes the door and awakens in a big, dark, escape-proof industrial-looking room with another chair survivor, the decidedly homicidal Gondoh (Tetta Sugimoto), and they spend the rest of the movie fist fucking each other. 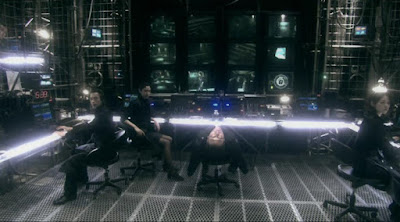 Naw, just kidding about the last bit, though it might've made for a more mesmerizing movie. Instead, they squabble and fight and are subjected to psychological mindgames and aural torture and then suddenly a mysterious woman with bad hair — Yurika (Ryô, also found in Casshern [2004]) — is revealed to be there as well. She is possessed by a super-powered alien lifeform called the Isomer, which transfers hosts only when the new host acts upon murderous instincts, and all three are part of a mysterious governmental experiment run by bad-hair babe's perfectly coiffured sister (Koyuki, of the original version of Pulse [2001 / trailer]) that is suddenly commandeered by a particularly amoral special forces man and his minions... 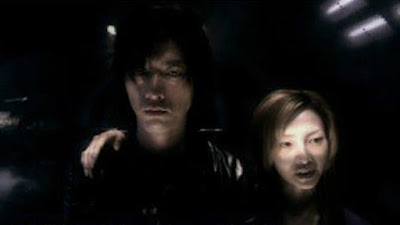 Alive is based on a popular manga comic from 1999 by the highly successful manga artist Tsutomu Takahash (who, according to Wikipedia, "is well-liked and popular due to his sense of humor and his looks"), but we have no idea how true the film is to the book. But what we do know is that this sci-fi, prison-set chamber play comes across as if a half-dozen stoned manga authors gathered together to brainstorm and put every single idea that was preceded with the phrase "Wouldn't it be cool if..." into the final script, even if the idea was only that at some point some character tosses a half-eaten chicken leg over his shoulder. (Yes, that happens.) As a result, one or two or a dozen inconsistencies and stupidities work their way into the almost somnambulist script — like the fact that the big bad special forces arrive by car & truck but, as revealed in the final scene, the whole science base is deep underground in the middle of the ocean. Or that a guy that gets impaled through the heart stays alive so as to give his gun to another guy and say "Kill me" (yes, the other guy shoots him — in the thigh, by the look of it). Or that Yurika is revealed, when un-possessed, to be soooo sensitive that a possession based on "murderous instinct" becomes a ridiculous idea. Or, or, or — snore. 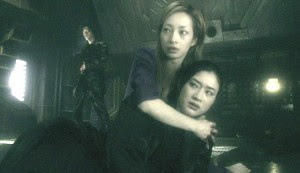 Once the special forces show up, the philosophical meandering tossed aside, and Tenshu goes super, the flick does get a bit more interesting for a second or two here and there, but it nevertheless never truly becomes engrossing or suspenseful in any way. It simply drags on, and even the slow motion, CGI-enhanced Matrix (1999 / trailer)-like fight scenes — possibly intended as highlights — come across as if filmed on a low budget, without either workmanship or concern, and then cut with dull scissors. The Frankenstein-Isomer looks sorta cool, at least until he goes all doe-eyed and wimpy, and a couple of sudden deaths are good for a giggle, but for the life of us we really don't know why the Isomer never springs over to the amoral head special forces man, for he truly comes across as the person in the movie with the most homicidal intentions. 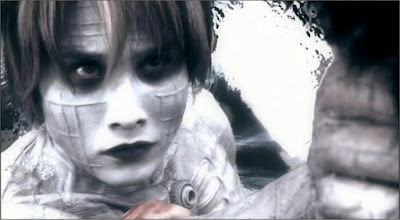 Perhaps the most noteworthy aspect of Alive is that it tries so hard to build atmosphere, and even transpires in an atmospheric setting, but in the end never truly has any. But, to give credit where credit is due: the movie's techno-laced electro-chill soundtrack is actually pretty good — too good for the movie, if you get down to it. It has aged well, unlike the movie or the movie's special effects, assuming one or the other or both were ever in any way even seen as good in the first place. 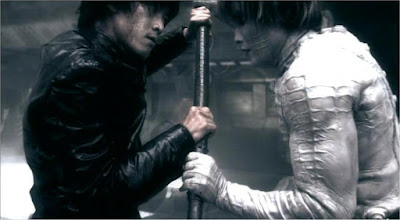