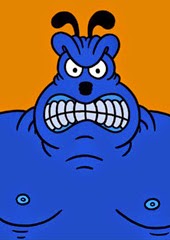 "And I'm still carrying the gift you gave,
It's a part of me now, it's been cherished and saved,
It'll be with me unto the grave
And then unto eternity."
(Bob Dylan)

OK, were the music from an actual band, we would be tempted to simply dismiss this hypnotic short as an exceptionally unique music video (not that a music video can't also be a short film with narrative — see this one here by Die Fanta 4). More than anything, however, Love & Theft is a mesmerizing exercise of merging animation with rhythm. (The great music is from Heiko Maile.)
Love & Theft was written and directed and animated by Andreas Hykade, the twisted mind behind the equally rhythmic and odd animated Freudian cowboy short Ring of Fire (2000), our Short Film of the Month for March 2011. Among the many metamorphosing faces down in a style that promptly brings to mind Jim Woodring's Frank: Betty Boop, Mickey Mouse, Spider-man, Adolf H., Droopy Dog, and KoKo the Clown, to name but a few. We don't see much content or story in this surreal short, but for that we want to watch it again and again and again.
Like that? The check out these other Short Films of the Month: Muzorama (Dec 2011) and Kunstbar (Sept 2011). Or Cyriak's cows & cows & cows (2010) or Baaa! (2011), neither of which we would want to watch on acid.
Posted by Abraham at 11:27:00 AM