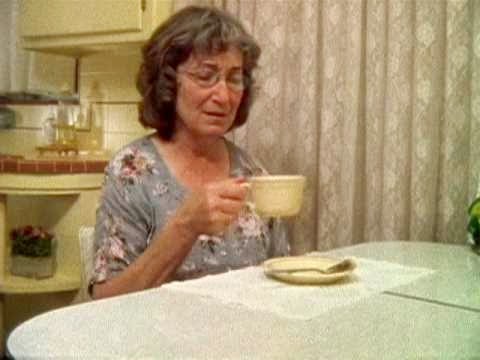 Here's an effective little short film that we find a wonderful example of making something with (virtually) nothing. Tea Time tells the tale of an elderly woman preparing some tea for herself and her husband...
Tea Time was originally made for an annual Los Angeles film event called "Attack of the 50 Ft. Reels" in which all participants shoot an entire story on one roll of Super-8 film and then turn in the unprocessed footage and a separately prepared soundtrack. So, in other words, the film is shot in order and edited in the camera itself.
The elderly lady is played by Regina Mocey, who has also appeared in small parts in a couple of independent movies, including Kill House (2006 / trailer). She does pretty well in Tea Time considering there was no opportunity for re-shoots. (You find her blog here.) The husband is played by Gary-7, who can also be found somewhere in films as varied as Zombie Night (2013 / trailer) and The Seduction of Dr. Fugazzi (2009 / trailer). The sparse but highly effective music was composed by Sukho Lee, who later directed this dull music video using the same concept: Super-8, shot in order and edited in camera.

The director and, one assumes, writer of the short movie is Erik Deutschman, seen here to the left. We could not find much current information about him, but in 2001 he was among those chosen by filmmaker magazine to feature in their article "25 New Faces of Independent Film". Since then he seems to have flown mostly under the radar.
Still, what Deutschman says in the article explains why Tea Time works so well: "I like to use old-school techniques, like in-camera multiple exposures, exposing directly on the negative, optical illusions and stop-motion animation." Deutschman's most successful short film to date, in regard to public response in any event, seems to be Split (1999 / full short), which no one less than Clive Barker calls "an exceptional movie, a startling original vision". We here at A Wasted Life, however, prefer the less-arty no-budget horrors of Tea Time.
TEA TIME - (A Short Film) from Erik Deutschman on Vimeo.
Posted by Abraham at 4:06:00 PM