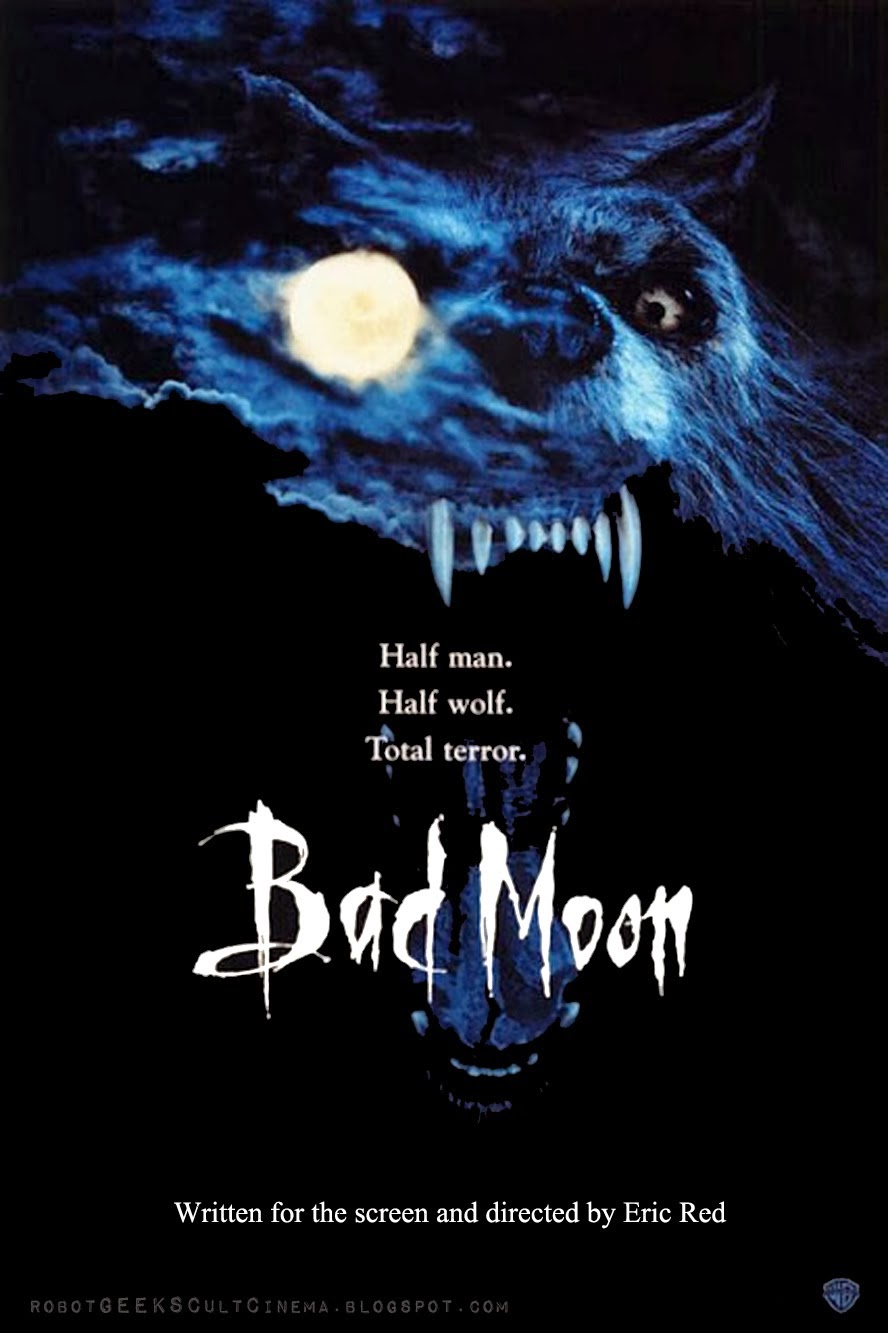 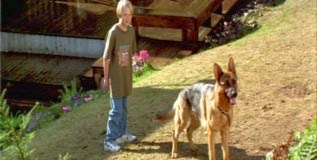 The book is supposed to be better, but then, everyone always says that anyway. One thing for sure, though, is that this Bad Moon is a film probably better suited for dog lovers than horror fans, providing the former have nothing against a little blood and guts, for while this low budget, direct-to-video B-film features relatively few scenes of violence, two of the film's "high points" are not short on ketchup.

As in Wayne Smith's book Thor, the real hero of Bad Moon is neither human nor werewolf, but rather the German Shepherd of single mom Janet Harrison (Mariel Hemingway of Into the Badlands [1991 / trailer] and Lipstick [1976 / disco down]) and her son Brett (Mason Gamble). Into their life returns Janet's brother Ted (Michael Paré of Village of the Damned [1995] and Blood Rayne: The Third Reich [2010]), a photographer last on assignment with his girlfriend Marjorie (Johanna Lebovitz) somewhere in Nepal. Unbeknownst to Janet, but as the viewer knows due to the earlier well-staged, tension-building opening sequence of major coitus interruptus in Nepal, Marjorie was bloodily torn to pieces by a werewolf and Ted infected by its bite before he could blow its head away with a shotgun (silver bullets be damned here).

Despite the trail of murder that seems to follow Ted where ever he goes, when a sleazy swindler ends up ripped to shreds near the Harrisons' home, Thor (a nice doggy once named Primo, probably long dead in real life) is assumed to be the guilty one and is sent off to the pound, from where he is no longer able to protect his "family" from the danger he knows to be lurking in the trailer parked next to their house. Luckily, plucky Brett isn't about to give up his beloved dog so easily and breaks into the pound that very night to help Thor escape. At that very same time, far across town and just as the moon is about to come out, the suspicious Janet finally confronts her ever-more-unhinged brother just as he is about to handcuff himself to a tree...

Bad Moon is no film to write home about, to say the least, but then, there hasn't really been a good werewolf film since Dante's The Howling (1981 / trailer).* Still, considering all the really lousy werewolf flicks available at your local video store — including that big budget fiasco Wolfman (2010 / trailer) — this unpretentious little B-film is entertaining enough, if only for its opening scene, one nicely done track shot that reveals what happened to Ted's second victim, Parè's unexpected turn as a good actor, and Hemingway's even rarer turn as an adequate actor.

But while the acting and the direction of Bad Moon are definitely strong, the script itself is so full of flaws and holes to be almost undeserving of the unexpectedly good performances by Hemingway and Paré, two has-beens of the 1980s who never had the career their initial debuts so promised, but at least can obviously still pay their rent doing what they do. (Hard to believe that Hemingway ever had brief period of infamy by being one of the first Hollywood starlets to publicize pumping up her boobs just to get the lead in a movie, Bob Fosse's Star 80 [1983 / trailer], an action that made more waves back then than is presently understandable in this post-Demi Moore & Pamela Anderson age in which every American female gets plastic pads as soon as the parents are willing to pay for them. Really, why do American women still wear bras? It ain't like their boobs ever sag anymore or even move when they run... but we digress.) 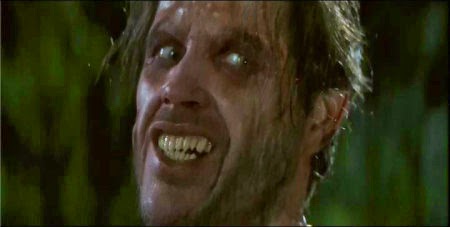 That scriptwriter and director Eric Red is capable of much stronger scripts is evident in that he is the man who wrote the classic (original) road thriller The Hitcher (1986) and the flawed redneck vampire movie Near Dark (1987 / trailer)... but then, he is also capable of much worse scripts, like that of the abysmal female cop driven to revenge flick, Blue Steel (1990 / trailer), not to mention the gagathon Hitcher Returns (2003 / trailer). Still, it seems a bit careless on part of the scriptwriter to state that a lycanthropy victim reverts by every full moon and then have every night a full moon... or did time fly while we were having fun? (Not likely.) 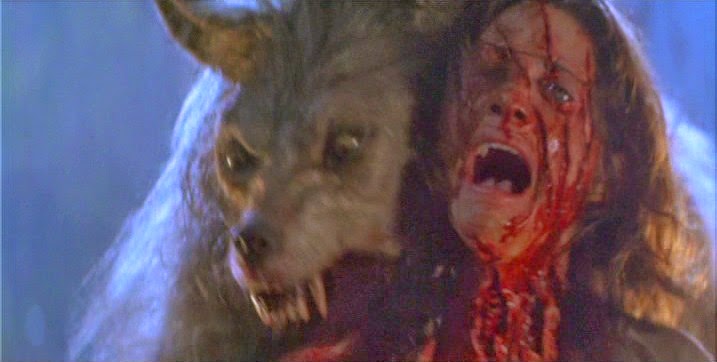 Likewise, the film leaves one scratching one's head about how a werewolf can climb trees, how Ted manages in the mornings to undo the handcuffs he uses to fasten himself to a tree each night, why none of the doctors Ted went to because of his "sickness" didn't have him locked up, why no one ever suspects Ted despite his trailer being located so close to all the brutally torn-apart victims referred to but (other than for two) never shown, why no one notices when Brett breaks into the pound, how a revolver can fire 8 times without being reloaded, why the damned werewolf looks so fake, and why ain't there more gratuitous blood & guts & titty scenes?

But to return to Wolfman (2010), for a moment. This film here probably cost that film's toilet-paper budget, and for all its flaws is also far more entertaining than the big-budget Hollywood snoozer, which totally wipes butt in comparison to Bad Moon. So if you ever are in the need of a werewolf flick and have to choose between the two, we here at A Wasted Life say take this one, it's definitely the better of the two... 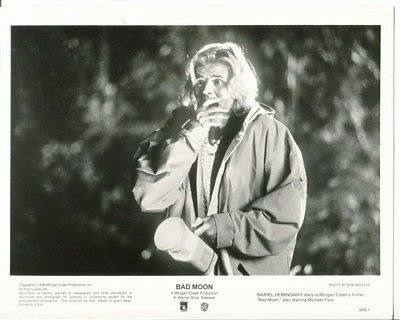 * This blanketing statement, of course, ignores a variety of films in which werewolves make appearances — not to mention two later top-notch werewolf films, Ginger Snaps (2000) and Dog Soldiers (2002).
Posted by Abraham at 9:53:00 AM