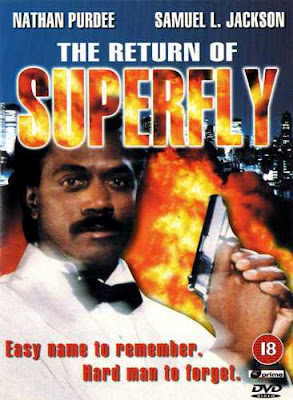 Crappy video of the title track to The Return of Superfly (Curtis Mayfield + Ice T):
Well, we really should have known better... 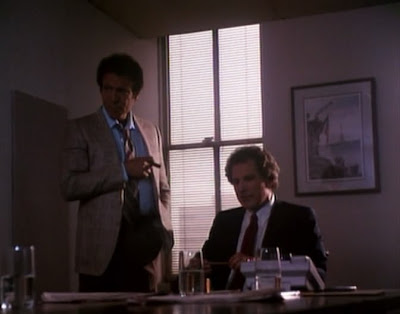 Director Sid Shore (13 May 1919 – 17 Aug 2006) was on hand way back in 1972 to produce the first Superfly which, according to his obit at The New York Times, "cost less than $100,000 and grossed more than $30 million". Superfly, as everyone knows, was an early Blaxploitation film directed by Gordon Parks Jr — the son of Gordon Parks Sr, who had directed another early Blaxploitation classic, Shaft (trailer), the year previously — starring the inimitable Ron O'Neal as Youngblood Priest, a smooth African American cocaine dealer out to retire from the biz. (Even if you don't know the film, you surely know the title tune from Curtis Mayfield [hear it here], which is just as much of a classic as Isaac Hayes' title tune to Shaft [here it here].) Superfly was followed in 1973 by Superfly T.N.T. (opening credits), this time around with O'Neal as the star, co-scriptwriter and director; it is not quite the classic that the first film is and, in fact, still hasn't had a DVD release. This flick here, made a good 18 years later, is the second sequel, and it is not without reason that it more or less is a completely forgotten film, despite being available of DVD: it sucks.

Trailer to the original Superfly (1972):
O'Neal was still alive when this film was made — he died ten years later from pancreatic cancer in 2000 — but the 18 years that had passed since the first film probably made him too old for the film, or maybe he just had the good judgement of not taking part in this listless milking of a dead cow that screams "no budget" much more loudly than it does "low budget". Instead, some unknown dude named Nathan Purdee — a future soap opera actor — slipped into the role of Superfly/Priest and, while not slipping and landing flat on his face, he sure the hell doesn't manage to convey any magnetism or anything memorable. Sure, he's good-looking with nicely broad shoulders and his threads are fashionably 80s synthetic, but he never manages to stand out in a film that is as flat and dull as it is narratively unexceptional, if not simple-minded and often illogical. 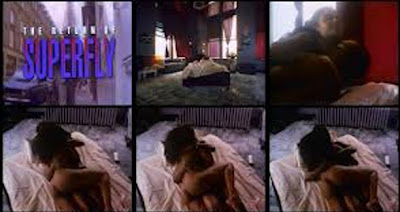 In all truth, the first minutes of the film do manage to convey the promise of cheap, enjoyable, violent sleaze, but of that promise only "cheap" is followed through to the end. A group of dealers rubout a bunch of other dealers and then go on to rubout the head honcho Eddie (Rony Clanton [Def by Temptation (1990 / trailer)], replacing Carl Lee [Werewolves on Wheels (1971 / trailer)] of the first film), who is too busy bonking his babe (Lisa Andoh) to pay attention to a warning. Yep, the opening scene has it all: drugs, cools cats with gats, escape and chase, blood, sex and a naked babe — but once Eddie lands on the floor and Priest sees the need to return from Europe to avenge his friend, the movie becomes a meandering and aggravating snoozathon with way too many laughable and "what-the-fuck?" moments to be any good, but not enough laughable and "what-the-fuck?" moments to truly be an enjoyable as a bad film. 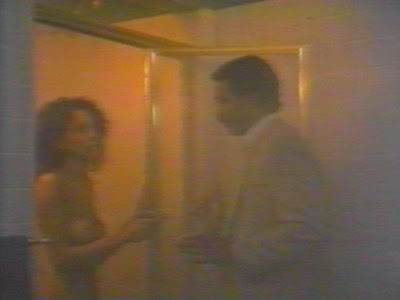 Of course The Return of Superfly has the obligatory sexy ladies, one of whom (Patrice Ablack) is dispatched quickly enough after showing her perkies and the other, Francine (Margaret Avery of  The Psychopath [1973 / first ten minutes]* and Terror House [1972 / trailer]); Francine keeps her perkies covered but (seriously) simply disappears midway in the film only to reappear to tiptoe through the tulips in Paris with Priest as the final credits roll — a more than unexpected sight, as the events leading up to her highly noticable disappearance definitely infer an off-screen death.

* The Psychopath is another unsung craptastic masterpiece by director Lawrence Brown, aka Larry G. Brown, who began his very short directorial career with an undeniable psychotronic movie, Pink Angels (1972):

Aside from the dearth of blood and violence and sleaze, the movie also lacks any narrative tension or any evidence of cinematic know-how, the visuals being as lifeless as the progression of events is slow, illogical and dull. A tighter script with less characters, less talk and more action might have lifted The Return of Superfly to the quality of a TV movie, but the film as Sid Shore made it is, at best, little more than a prime example of how not to make a crime thriller. Dull chase scenes, excessive dialogue, diffuse characters that do little and offer nothing, poorly staged and poorly shot action sequences, bad acting across the board (with the possible exception of the now top-billed but less than tertiary present Samuel L. Jackson looking and acting as if he ain't acting that he is on drugs), inept editing and a less-than-gripping story ensure that The Return of Superfly never becomes anything more than an easy to forget and 100% non-essential viewing displeasure... 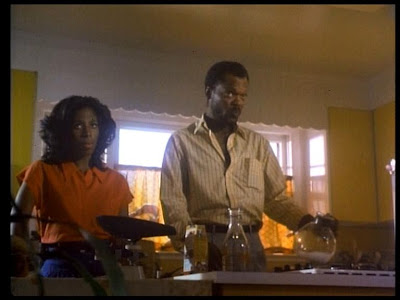 The sound track is groovy, though; we'd totally forgotten what great music Ton Loc once made.
Ton Loc — Cheeba Cheeba:
Posted by Abraham at 10:15:00 AM