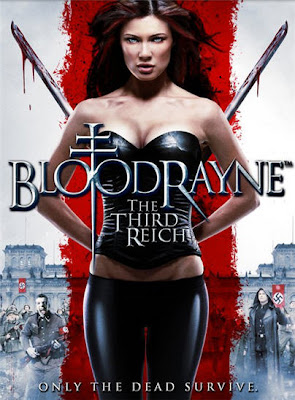 (Spoilers.) OK, we admit we're a glutton for punishment — otherwise how can anyone justify watching an Uwe Boll film by choice? But, to tell the truth, we (sometimes) sort of enjoy his films — they're a bit like Jochen Taubert movies (see Zombie Reanimation  [2009] or Ich piss' auf deinen Kadaver [1999]) but a smidgen more professional and with bigger budgets and real stars, even if the "has-beens" and "never-beens" and "never-will-bes" do, normally, outnumber the "bes". 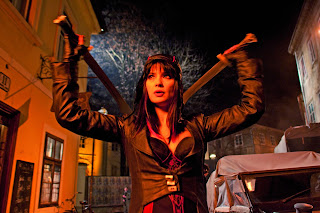 We will admit that Alone in the Dark (2005 / German trailer) did make us pull our hair out at the roots, but In the Name of the King: A Dungeon Siege Tale (2006 / trailer) entertained us well enough and we really found Postal (2007 / trailer) rather funny. We can't help but think that, one day, Uwe Boll will no longer be the brunt of so much hate but rather the focus of a certain level of pop cult popularity ala Ed Wood. Like Wood, Boll has a vision (of sorts), and like Wood, he's convinced of his vision, and also like Wood, he doesn't give a fuck what anyone else thinks... unlike Wood, naturally, Boll's film are not only never really all that off-the-wall, but he himself is enjoying enough success that the films keep rolling while he still alive.

Which brings us to this film here, one of his many, the third BloodRayne film, a direct-to-DVD follow-up of the first two movies, BloodRayne (2005 / trailer) and BloodRayne 2: Deliverance (2007 / trailer), both of which he also directed and neither of which we have seen. Indeed, the only reason we watched Bloodrayne III: The 3rd Reich was because we were in the mood for a 3-D movie and it was the only non-XXX 3-D movie our buddy Fritz-Helmut still had on his computer. And as we do not belong to the kind who likes watching the gynaecological in-and-out and spurting body fluids in the company of those we wouldn't want to do the same thing with, Bloodrayne III: The 3rd Reich was chosen as the evening's entertainment. 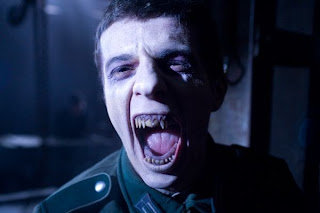 But somehow we should have expected it: the 3-D of Bloodrayne III: The 3rd Reich was not only obviously converted after the fact, it's a true disaster and painful to the eye. Should for some inexplicable reason you ever chose to watch this film, watch the 2-D version, as it is surely less painful — but as it was, we couldn't turn the 3-D off, so like the true masochists that we are we suffered to the end. 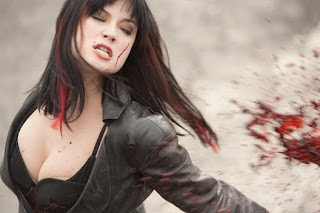 Luckily, the film was sort of fun in a truly terrible way, so we more or less enjoyed it even if we would be hard pressed to even recommend the film to anyone — it's about as stupid as it is crappy. Of great help was, of course, the presence of Clint Howard, the talented brother of untalented director Ron "Opie / Richie" Howard, as scene-stealingly over-the-top and atrocious as ever, and of course the eye candy that plays the title character, Natassia Malthe (supposedly also seen somewhere in Disturbing Behavior [1998]), is also pleasant — even if she seems only truly capable of glaring and can't even really overact. Her mandatory nude scenes help prove once again that inverted nipples are hot, too. Speaking of hot and, in turn, all the eye candy of Bloodrayne III: The 3rd Reich — and all other Boll movies — we really gotta say that Boll has a much better taste in women than that other similarly talented and productive director of direct-to-DVD flotsam, Jim Wynorski; Boll actually gets gals that look cowabunga and have individuality, whereas Wynorski seems to simply like Hollywood bimbos with excess silicon. But then, one is from Europe and the other from Long Island...

But we digress... as if that matters when talking about a Boll movie. In any event, Boll manages to work in a totally logical lesbian scene into the movie — nothing like a woman beating up Nazis to get that lubricant flowing — that we guess could be called one of the highpoints of the movie, a movie that in all truth never really aims for any high points. As normal for a Boll film, the script is often somewhat disjointed and nonsensical, but the narrative development nevertheless zigzags more-or-less semi-comprehensibly to a finish, often leaving one with the feeling that either a lot has been cut out or the scriptwriters earned more money the less time they spent on the script. But seeing how desperately Boll sometimes pads the running time — the opening credit sequence, for example, takes forever — we find it doubtful that anything filmed was cut from the final film. 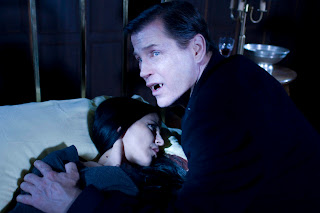 The plot? Oops! Did we forget to mention it? Well, it's not like it's really all that important, or? Simply put, in Nazi Europe a half-human half-vampire (a "Dhapmir", in other words) named — Duh! — Bloodrayne spends her time killing Nazis with the underground resistance led by her current fuck Nathaniel Gregor (Brendan Fletcher of Blubberella [2011 / trailer]) when she isn't busy killing vampires or having sex. Unluckily, one nasty Nazi Commandant Ekart Brand (a very puffy-looking Michael Paré, of Blubberella [2011 / trailer]) gets a sip of her blood along the way and goes vampire, and between bouts of megalomania decides to go to Berlin to make Hitler a vampire and the Third Reich eternal... Helping him is the mandatory Nazi mad doctor, named Dr. Mangler (Clint Howard, of Blubberella [2011 / trailer]), and a bunch of Nazis. Can they be stopped? What do you think?

Next to Howard's overacting and the babes, the best things about the film is the location shoot in Croatia — the scenery looks real enough for the time period — and the background music of the film, which sounds like it should belong to a better film; you get to hear a lot of it during the interminably stretched-out opening scene at the train station in which deported Jews and other undesirables (most of the young ladies of which are wearing perfectly made-up eye-liner and lashes to match their period deportation rags) get off the train to start their death march. (Wait! Do we see some high heels, there?) 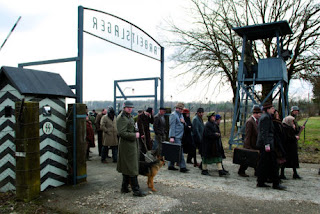 But aside from that, the film offers a lot of less-than-convincing fight scenes, a lot of belly laughs and an occasional "yuck" scene; the cinematography is professional, the editing less so. Although at one point Dr Mangler does pontificate about what kills vampires, the rules are pretty much ignored and the vampires die by sword, gunshot and even a big rock, the last of which plays an important role in the highly anti-climactic final in which the über-böse Ekart Brand, who throughout the film is presented as getting stronger and eviler to the point of being seemingly unstoppable, is negated in a bloody death that is so quick it has the intensity of a sneeze.

Do we recommend the film? Of course not. Do we regret seeing it? Well, not really — it really is more entertaining than the average Nora Ephron film, after all. But like an Ephron film, there is really no pressing reason to watch it... but if you do, be aware that there is no difference between the rated and unrated versions, so you can watch either.