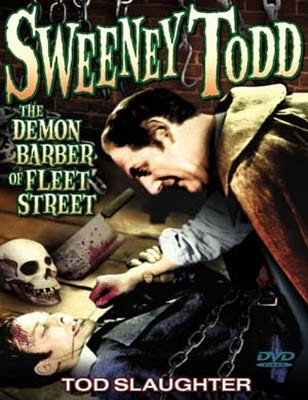 "May I polish you off, sir?"
Sweeney Todd (Tod Slaughter)
Full film:

Here's a funky and funny blast from the past that is more fun and interesting than it is either good or imperative: the first sound version of the tale of Sweeney Todd, the Demon Barber of Fleet Street, made only eight years after the earliest still-surviving version of the tale, Walter West's 1928 silent, Sweeney Todd. (The earliest movie, made two years earlier by director George Dewhurst, is now considered a lost film.)
Whether Sweeney Todd was a real person or not is, like Sawney Bean, a matter of contention. What is known is that Todd first appeared in the Victorian penny dreadful The String of Pearls (1846–1847), probably written by James Malcolm Rymer and Thomas Peckett Prest, and by the time George Dibdin Pitt – "a hack playwright of the time who commonly purloined other people's ideas" – adapted the tale as a melodrama, the story was billed as "founded on fact." Since then, Todd and Mrs. Lovatt, like Bean, have entered the English-speaking world's cannon of "true" urban legends and enjoy perennial name recognition.

Actor Tod Slaughter, who plays the titular character in this early B&W version of the tale, has on the other hand long been forgotten by the masses. Born on 19 March 1885, Slaughter found his way on stage by 1905 and thereafter established himself as popular villain in many a revival of a long-dusty Victorian melodrama – including Sweeney Todd, which he legendarily played over 2,000 on stage over the course of his life. He made his film debut in 1935 with the melodrama Maria Marten, or The Murder in the Red Barn (full film), which was produced George King, who also took over the directorial chores as well for Sweeney Todd, The Demon Barber of Fleet Street. Like most George King films, Sweeney Todd was a "quota quicky," a film quickly and cheaply (usually as the second feature) made so as to meet the British government's requirement for British-made cinematic productions.

As an actor, Slaughter is a total ham. But for a rare exception, he always played the villain – and he did so with gleeful, cackling, hand-wringing, beady-eyed abandonment. Remember that scene in Austin Powers (1997 / trailer) in which Dr. Evil breaks out in his mad-man laughter and continues for such a long time that it becomes uncomfortable and overtly ridiculous? Well, Slaughter's cackling in this film (and his others) could well be the inspiration for that joke, for it is constant any seldom stops – and if it does, it is only replaced by the evil eye or compulsive wringing of the hands. Yep, Todd be evil – in the most Victorian, melodramatic sense of the word.

The film was already somewhat of an anachronism when it was made, if only due to Slaughter's old-fashioned style of acting, but time, oddly enough, has been somewhat kind to the film by adding a nostalgic sheen which helps make the movie a bit more fun to watch than it possibly should be. The sound is dreadful, due probably to the film's age as much as to the primitive sound recording of the day, and the direction definitely leans towards the static, but as a representation of an earlier, simpler age of horror the film remains oddly and unexpectedly entertaining, even if some plot developments earn a hearty and non-intended guffaw. (The final ending, for example, in which Sweeney Todd suddenly leaves a suitcase of money and jewels outside on the ground to re-enter the burning barbershop to conduct hand-to-hand combat with the hero is mind-bogglingly stupid and, in turn, hilarious.) The film is also remarkably restrained considering its topic, with nary a slit throat to be seen – indeed, in the original stage version, as in this film, Todd's victims die by falling backwards through a trapdoor and breaking their neck when they hit the cellar floor; he only slits their throats if the fall doesn't kill them. Likewise, even if it is never explicitly said that Mrs. Lovatt (Stella Rho) makes pies from the dead, it is conveyed with subtle and funny implication. There is an truly out-of-the-blue interlude in Africa that is also good for a giggle, but it is more-or-less needed to supply the film's male hero, Mark (Bruce Seton), a quick path to riches. But even with his new found riches, will Mark be able to stop Todd from marrying his sweetheart Johanna (Eve Lister), or will Mark become part of pot pie? 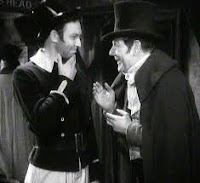 In all truth, Sweeney Todd, the Demon Barber of Fleet Street is one for the kids, those interested in aspects of film history, or those who get a giggle from less-than-stellar productions from the past. As such, it is more fun than good, so if you give it go keep your expectations down and you might enjoy it – we did.
Posted by Abraham at 1:09:00 PM