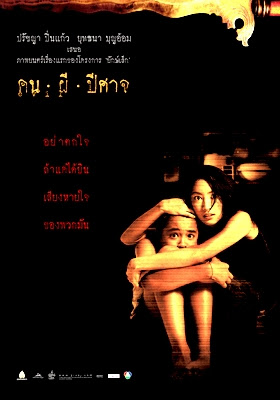 The original Thai title, Pisaj, which translates into "Ghost", is perhaps the more fitting title, for though there is more than one ghost in the movie and in the house, House of Ghosts concentrates for the most part on a singular ghost, that of a former hired girl prone (both when alive and dead) to sadistically mistreat a young boy named Arm. 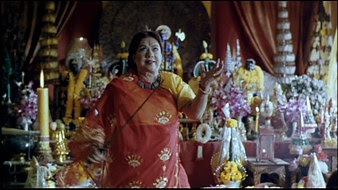 The movie, which seems to be the directorial and screenplay début of Chookiat Sakveerakul is both atmospheric and at times effective, but in the end it is more interesting for its setting in and reflection of contemporary Thai working class culture than it is as a solid slice of horror. But face it, sometimes it's simply fun to watch a film, no matter how flawed, in which the prelude to a scary scene is the directive "Clean up my Buddha room" and not "Take this up to the attic / down to the basement." 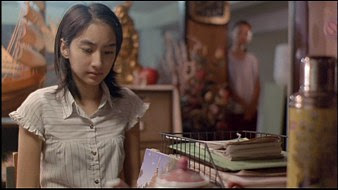 One of the strongest visual shots is the film's opening, where we see the daily activities of what seems to be a successful Thai print shop: in the distance, at the shop's entrance, we eventually see a slight figure of a female with a suitcase appear at the door, and long does she stand there before she finally enters. The lonely, timid figure turns out to be Oui (Pumwaree Yodkamol, also found in Ong Bak [2003 / trailer]), a young woman who looks more like a young teenager than a young adult, and who, alone in the world after experiencing the double shooting of both her parents, has turned up at the doorstep of the print shop run by her aloof and severe Aunt Bua (Ammara Assawanon, also seen somewhere in The Ghost of Mae Nak [2005 / German trailer]). Aunt Bua takes Oui in, perhaps less due to familial love or responsibility than the need for someone to care for her grandson, Arm (Alexander Rendell), a young boy who, to put it simply, sees dead people... 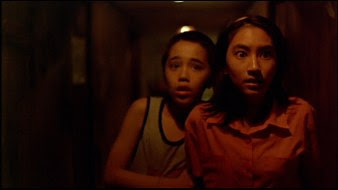 For the most part, House of Ghosts pursues a subtle path, raising the tension primarily through bangs in the dark, reflections in glass, Arm's obvious fear of the night (or aversion to specific foods), the mystery of the deserted top floor and the disappearance of the previous woman who took care of Arm, the tales of the print-house workers who seem almost amazed that Oui is still there every morning, or Aunt Bua's distant attitude, piercing eyes, and supplementary position as a medium. This subtle approach is occasionally pushed to the side for a bloody hallucination or two (which Oui suffers as a result of the death of her parents), and then jettisoned at the end, to mixed results, when the director and narrative descends into a confusion of killer apparitions and a crazed, seemingly unstoppable Aunt Bua out for blood, before the movie almost peters out with a somewhat open-ended, overly rational final scene that leaves the future corporal fate of the three survivors rather unresolved. 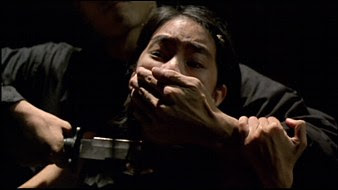 House of Ghosts intrigues through its foreignness and characters, and does manage to build a certain sense of dread and unavoidable fate, but the script reveals a slight lack of clear direction and not only tosses in a bit too much but also fails is in its inability to tie all the loose strings together. Who are all the ghosts and why are they there? And where do they all go to when the shit hits the fan? In the end — at least until an unexpected revelation in the final scene — it appears that the only ghost truly out for blood is that of the sadistic former house girl. (Perhaps the second strongest scene in the movie is when she appears in Arm's hiding place under the sink and begins crawling towards the terrified young boy.) The whole bit about Oui's hallucinations is also a bit out of place, for since the viewers never truly doubt that the ghosts are real, the hallucinations come across as unneeded; likewise, while Oui's hallucinations might be good for a nasty scene or two, they also confuse — at one point, one hallucination even briefly leaves the viewer unsure whether or not Oui might not actually be dead and not know it, much like the daughter in season one of American Horror Story [2011 / trailer]). 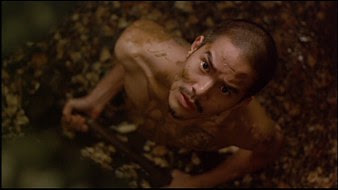 It also seriously annoys when the character of Mai (Theeranai Suwanhom of Headshot [2011 / trailer] and Happy Inn [2005 / trailer]), the deus ex machina of the grand finale, has absolutely no problem getting into the house (after it's made more than clear that it is locked up and Oui & Arm are trapped in it), but subsequently cannot get out. At least Aunt Bua's sudden conversion from a distant and unfriendly old woman into a blood-thirsty wacko with almost Terminator-like unstoppableness is slightly foreshadowed — the question "Where are the Buddhas?" actually does portend a lot — and is then revealed to have precedence, but why she should even return home in the first place is one of many natural questions that never get answered. 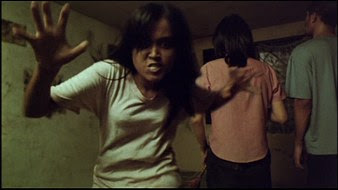 More interesting than good, House of Ghosts has atmosphere and a decidedly leisurely pace until the havoc explodes at the end — and then the mayhem ends almost as quickly as it begins, with the movie tapering off with a final that is particularly prosaic and open (what happens to everybody thereafter?). We recommend it with reservations. 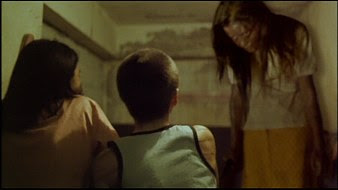 Director/scriptwriter Chookiat Sakveerakul, by the way, went on to do the screenplay to the far more consistent if ridiculous [and entertaining] action flick Chocolate (2008 / trailer). 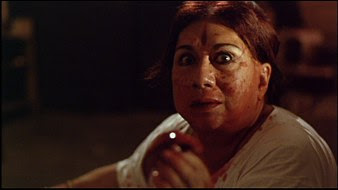