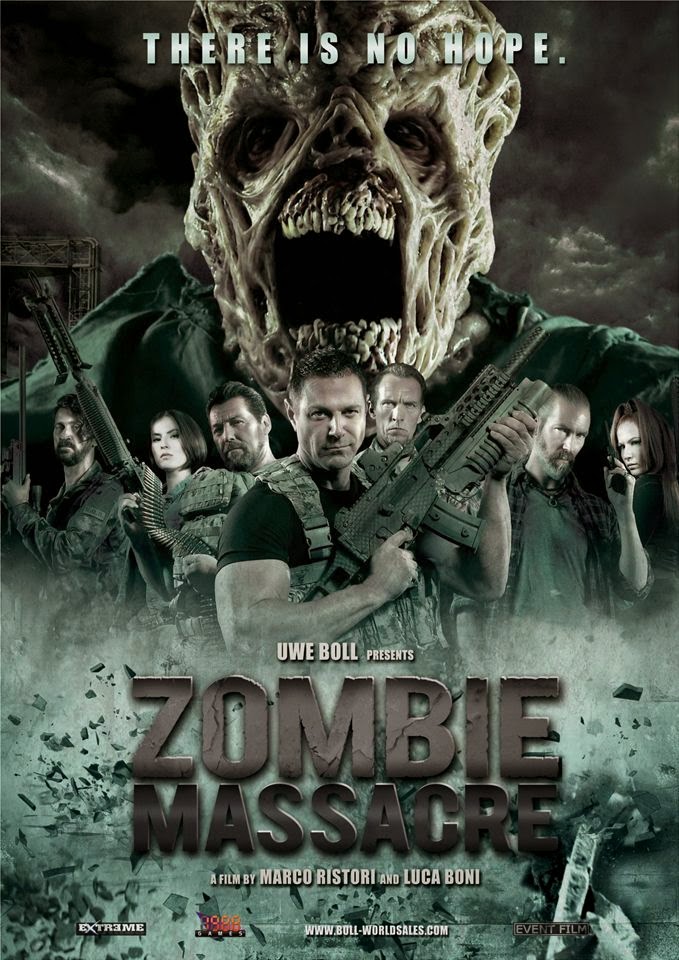 Wow! It only took 15 years for Zombie Massacre, the Commodore Amiga computer video game that you've never heard of, originally released in 1998, to finally make it to the little screen — as a direct-to-DVD Uwe Boll production. (We can't help but suspect that the blood and explosions in the video game, despite the year of its genesis, are surely better and more convincing than the CGI blood and explosions of the movie.)

Not that we knew it was a Boll production when we put it on: it was merely one of some dozens of movies in the "Zombie Movies" folder on our pal's computer, where it resided under the title it was released as in Great Britain, Apocalypse Z, a title clearly intended to ride on the coattails of the far more famous and successful big budget B-movie and Brad Pitt vehicle, World War Z (2013 / trailer). Had we known from the start it was a Boll production, we probably would've skipped it, because we are not a fan of him or his movies. His films are the only ones we know of that are continually worse than anything by The Asylum, if only because they — amazingly enough — are made with so much less care.

Be what it may, however, Zombie Massacre begins with an introductory scene before the credits run, a scene that sets up the situation in which most of the remaining movie is set. And this pre-credit sequence is without a doubt a total knockout. Built around a brief insight into the depressing and dead-end life of a factory woman leading up to her conversion into a zombie, the excellently directed and set interlude overflows with an existential bleakness that literally planted a hook firmly in our gums and made us want to see the movie. And roughly 85 minutes later, the movie then ended with a closing scene that was a joy: a hilariously breast-heavy and bloody ode to T&A&B&G (tits and ass and blood and guts) exploitation set at pool party heavy with silicone. Great.

The problem, however, is that everything in-between those two outstanding scenes sucks. Though the script and directorial credits are given to two Italians, Luca Boni and Marco Ristori, who perhaps allowed themselves to show some notable talent in those two scenes, the rest of the movie is 100% Uwe Boll at his worst — in other words, a senseless and boring exercise in Z-grade filmmaking.

To give credit to the plus points, it should be mentioned that most of the zombies look pretty groovy and groaty, if a little bit too much like those of the crappy no-budget Aussie flick, The Dark Lurking (2012). Here, too, however, the Boll effect sneaks through on occasion: one or two or three zombies look like they're wearing ill-fitting face masks, and the Zombie King that shows up at for the final showdown is too over-the-top and out-of-the-blue to be good for anything other than a laugh.

Another plus point, of course, in the fabulous weightlifter Christian Boeving as the movie's lead hero Jack Stone. We gotta admit we've had a (to use a definite misnomer) soft spot for him ever since we caught his movie debut, as "Lance Bronson", in Chi Chi La Rue's X-rated flick Posing Strap (1994), where he blows his load for Zak Spears. (We have yet to catch his only other known porn job, a solo scene as "Eric Masterson" in Crystal Crawford's Coverboys [1996] — but we will, one day.) In Zombie Massacre, however, the only skin he shows is his fabulous hairless torso in a singular and out-of-place two-second scene and, regrettably, he remains fully clothed for the rest of the movie. (That's him, by the way, on the Posing Strap poster below.) As Jack, he plays a man with nothing left to lose who joins three mercenaries to try to put an end to the "situation". 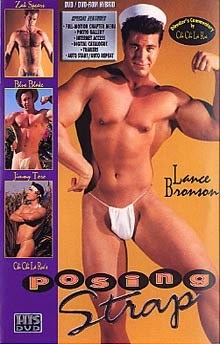 And what is the situation? An explosion at a top secret and illegal bio-warfare experiments site run by the evil US government in a small Eastern European country releases an agent that turns all the locals into kill-happy mutant zombies with bad teeth and skin. Jack and his team of mercenaries — bomber John 'Mad Dog' McKellen (Mike Mitchell), sniper Dragan Ilic (Daniel Vivian) and Asian samurai Eden Shizuka (played by a very Caucasian Tara Cardinal) — go in to place a bomb at the power plant so contain the situation by wiping the place off the face of the earth in a faked nuclear meltdown and explosion. Once there, they find out they've been double-crossed by General Carter (a much too young and too English Carl Wharton) and now have but an hour to fight their way through the zombie-infested town to get to the airport and escape...

A simple and non-involving plot that has enough holes in it to be mistaken as Swiss cheese, but which should nevertheless be enough to make a feature-length movie around. But somehow, the filmmakers fail at this and, instead, pad about a 20 minute's worth of zombie action with triple the amount of pointless and aggravating dialogue and long scenes in which nothing happens. And, really, Uwe Boll — with an accent thicker than Arnie's — doing a cameo as the President of the United States? No, it's not funny, it's insulting. Is it really that hard to find cheap and desperate American actors? (Of some fun in this regard, at least, is Jon Campling [of our Short Film of the Month of April 2013, Dead Man's Lake], who plays the involuntarily involved tourist — "entrepreneur" — Doug Mulligan; an Englishman playing an American, he doesn't just overact a storm, he actually over-accents a storm.) 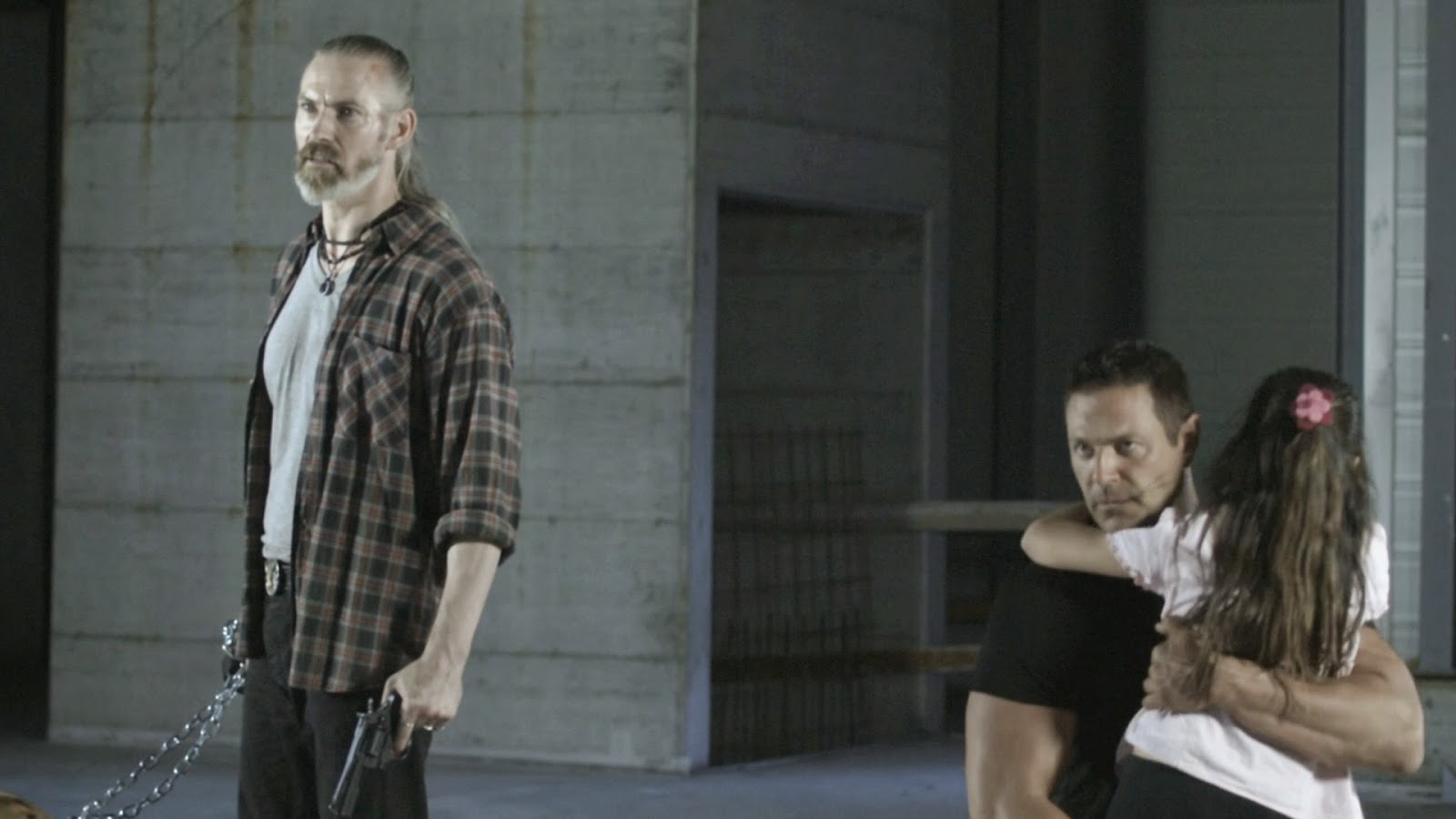 Whatever. Zombie Massacre is simply another sorry-ass Boll film that definitely does not require viewing — as a whole film. On a trash level, the trailer above is far more entertaining than the movie itself. On a cinematic level, the pre-credit sequence is well worth watching — but do yourself a favor and either turn the flick off once the credits begin to roll or, if you're in the mood for some grindhouse-flavored sleaze, hop forward to the movie's final scene at the swimming pool. Everything else is truly a waste of your time... and face it, you ain't getting any younger.