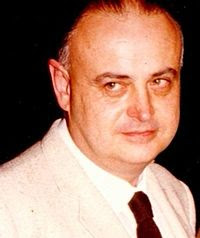 A light has gone out.
The French director Jean Rollin may not be a well-known name to the average film-going Joe, but to fans of the weird and obscure his name – and his films – instigates both cheers and jeers. He is a filmmaker that divides audiences, but even those who do not care for his decidedly personal low budget genre films tend to agree that he is – was – a filmmaker with a unique artistic vision that has remained mostly true to his vision since his first film in 1968, Le Viol du Vampire. Since then, much like the equally inimitable and obsessed Spanish filmmaker Jess Franco, Jean Rollin the artist has continually divided viewers between those who sing praise and those who would prefer to throw shit. Those who prefer to do the latter probably also would prefer a Michael Bay film, everything that Jean Rollin is not.
Beginning with Le Viol du Vampire, Rollin went on to produce an oeuvre of truly exceptional films that range from surreally beautiful to gorily graphic to nearly incompetent to in-&-out-in-&-out-&-spurt-spurt-spurt. Working within the realms of genre and exploitation films, he revealed an obsession with dreamy beauty and poetic horror and a true fascination for lesbian vampires, and was almost always willing to sacrifice logic and narrative for the striking visual image. A selection of some of his films are presented below, the choice made purely on the grounds of which films we could find trailers to on the web.
With the death of Jean Rollin, the world of genre filmmaking has lost a rarity: a filmmaker less interested in making popular or mainstream films than he was truly driven to create distinctive and highly personal cinematic visualizations that owe nothing to anything other than his own artistic vision.
The world of film is all the poorer with his demise. 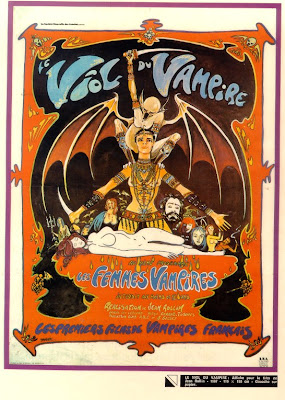 His first completed and released "full-length feature" is actually two B&W short films, Le Viol du Vampire and Les Femmes Vampires ("The Vampire Women"), strung together to make one impressionistic and surreal whole. The first is about the fates of three Parisians (including one shrink) and the four neurotic women inhabiting a country house that they try to convince are not vampires. The second concerns the return of the Vampire Queen and her attempts to resurrect the dead as a scientist attempts to find a cure for vampirism. It claimed to be the first vampire film made in France, but that honor arguably goes to the 1932 masterpiece Vampyr by the Danish filmmaker Carl Theodor Dreyer, which was shot on location in France and produced by its French star, Baron Nicolas Louis Alexandre de Gunzburg. 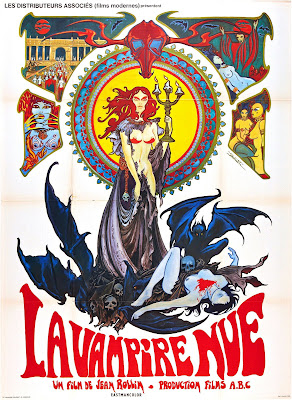 His second film, a dreamy and languorously paced vampire film about a young man who goes in search of a beautiful young lady with whom he had a decidedly strange encounter. He stumbles upon a clique of men, including the woman's father, trying to discover the secret of immortality from the vampire daughter. The film is Rollin's first "true" full-length film, in color this time, but like the first it is more interested in visuals and mood (and beautiful women) than linear logic, entertaining pacing or other conventional filmic elements of mainstream film. 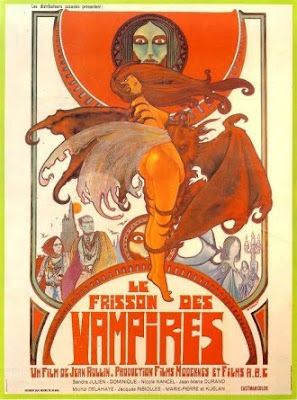 Le Frisson des Vampires / The Shiver of the Vampires (1970)

His third vampire film, once again reveling in Rollin’s fascination for beautiful vampiric nubiles as well as his penchant for nonsensical and languid plots that are continually put on the back burner in favor of visuals and surreal events – and more babes. Two newlyweds stop off at a castle owned by recently deceased cousins that is inhabited by vampires... beautiful, aggravating, amazing. 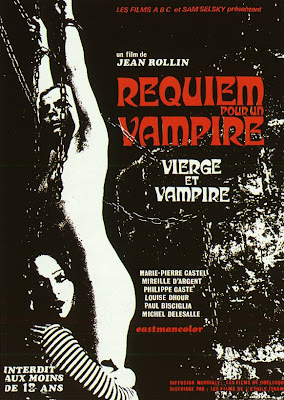 Shot in a with nudity version and without-nudity version, Requiem for a Vampire would make an excellent double feature with that surrealistic non-horror art film Black Moon (1975 / gratuitous scene), if only for the totally in-the-middle-of-an-untold-story way of opening the film. Two women on the run from something run into lesbian vampires in a castle and must decide between eternal life or remaining human. As always: surreal, languid, impressionistic, gaudy… 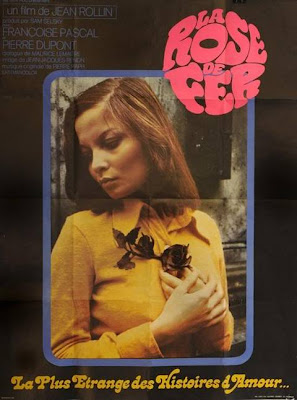 His first non-vampire film and a complete financial failure when released, it remains one of his most unjustly ignored movies. Far less garish than his earlier films, The Crystal Rose is a disturbingly beautiful horror tale of a young couple that go to a cemetery to screw and can no longer find their way out. 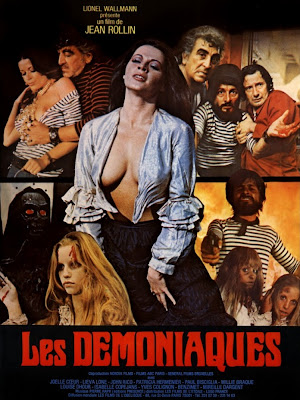 Another of his rare non-vampire filmic excursions and, in all truth, not one of his best films – although just as weird and as perversely interesting as ever, Les Démoniaques proves that 1980's Le Lac des Morts Vivants / Zombie Lake is not such a laughable fiasco just because Rollin took over from Jess Franco after the latter split to do Oasis of the Zombies. But as cheesy as much of the film is, the trailer does well to indicate why Rollin can often be described as the French Fellini of low budget Gallic genre films – the technical finesse might be lacking, but not the idiosyncratic artistic vision. 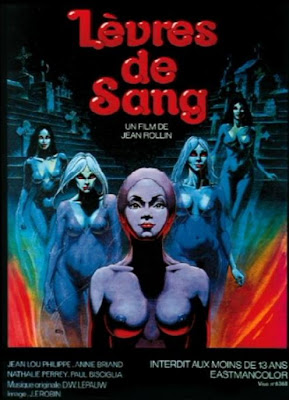 Lévres de Sang / Lips of Blood (1974)
Also available in a hardcore version under the title Suce-Moi Vampire. A surrealistic love story bursting with nude and semi-nude nubile vampires and almost no dialog. Nice poster, too. 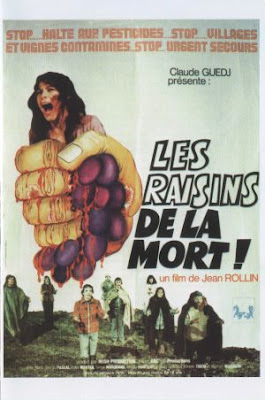 Rollin's return to horror after making a plethora of hardcore porno films under the alias of Michel Gentil (including such illustrious titles as Phantasmes Pornographiques, Hard Pénétrations and Vibrations Sexuelles). Telling the tale of a young woman who gets trapped in a country village where the pesticide used on the local wine grapes turns everyone into homicidal zombies, Les Raisins de la Mort is often claimed to be the first French gore film, if not at least the first French zombie film. Cheesy and gory, it is definitely one of his better later-day films and also one of his most traditionally accessible. 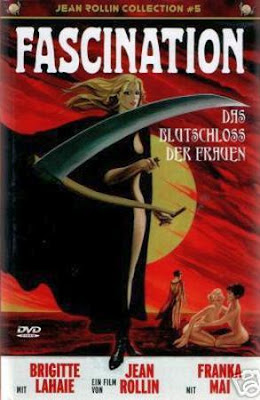 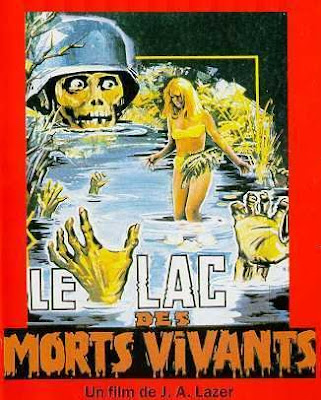 Perhaps the most easily available of all his films, Zombie Lake is probably also his least personal work. According to Wikipedia, the director himself considered it his worst film. Whether this is true is perhaps open to conjuncture and discussion, but it is nonetheless a film best viewed by fans of cinematic incompetence – and a good spliff will only help make it all the more bearable. For a full Wasted Life review, go here. 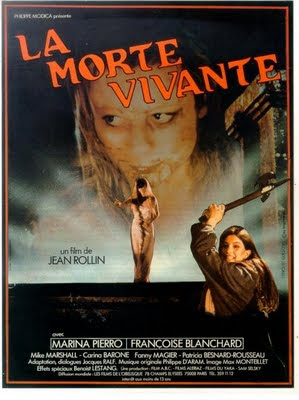 Like so many – if not most – of his films, this horror film is far less scary than it is mesmerizing, and for a change the events and plot is relatively linear. The cheap gore is a lot of fun, too. A chemical spill revives a beautiful young girl from death, but now she has an insatiable hunger for blood, which she procures by violently killing people. Discovered by her childhood best friend, the living lovely lady begins to procure nubile from the local village to help satiate her friend’s hunger... 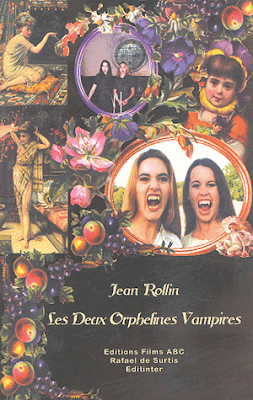 A film that shows a master on the wan and a rock-bottom budget; it features his normal obsession with vampire babes, but is low on the idiosyncratic visual excesses of his earlier films. The dubbing is particularly atrocious, even for a Rollin film, and even the poetic aspects kip too far into Prozacville. For true Rollin fans and completists only.
Posted by Abraham at 10:59:00 AM