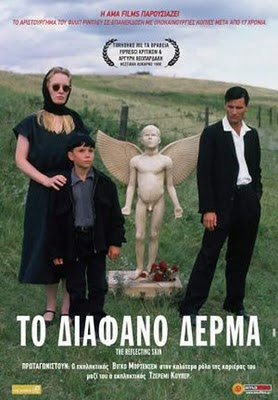 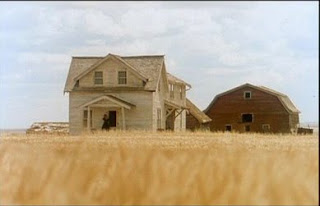 The Reflecting Skin is one of those films that, although it made huge (but critically divided) waves when it came out, has since fallen into total but thoroughly unjustifiable obscurity. An independent film, it’s been unavailable for years (but for a VHS version that can occasionally be found in thrift shops but is hardly worth watching since its bad cropping rapes the film's wonderful framing and beautiful visuals), but it has since been released in Germany on a Region 2 Blu-Ray—which is better than nothing if you happen to have a region-free Blu-Ray machine or live in Germany. 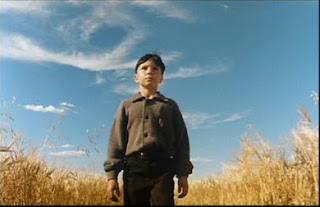 On screen and in full glory, The Reflecting Skin is probably one of the most beautiful and most seriously disturbing films of the latter quarter of the last century, a film that seriously defies expectations and description, a film that must be seen to be truly appreciated—or, possibly, truly rejected. Like the intentionally obscure, genre-bending films of latter-day David Lynch—Lost Highway (1997 / trailer) or Mulholland Dr. (2001 / trailer)—The Reflecting Skin is a film that separates the men from the boys, the blondes from the brunettes, the cats from the dogs: you either love it or hate it, but you definitely won't be indifferent. (In all truth, however, if you’re a reader of this blog, you'll probably find it cowabunga.) 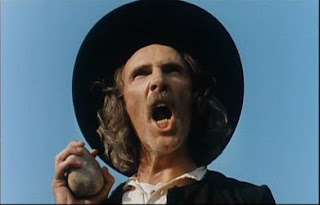 To say that The Reflecting Skin has a traditional plot would be an overstatement; it is more so a film that simply starts and eventually ends, the events in-between achieving a narrative coalescence primarily because they are shown through the eyes of a single character, the eight-year-old Seth Dove (Jeremy Cooper), growing up in a repressive and fundamentalist rural Idaho community of the 1950s. The son of an abusive mother (Sheila Moore) and broken father (Duncan Fraser of Needful Things [1993 / trailer]), Seth becomes convinced that the neighboring albino widow Dolphin Blue (Lindsay Duncan, Alice's mother in the Tim Burton enjoyable trifle Alice in Wonderland [2010, trailer]) is a vampire. Seth's few friends drop one by one, falling prey to four homicidal delinquents in a black car, but his father, stained by a past misdeed (a homosexual pass) is blamed; his solution to the problem is self-incineration—in front of the eyes of his son, wife and an accusing policeman. Soon thereafter, the eldest son Cameron (no less than Arragon himself, a young Viggo Mortensen, fresh from Texas Chainsaw Massacre 3 [1990 / trailer]) returns home from the military, where he got to watch the atom bomb being tested and play with "snowballs" made from the atomic ash. A romance blossoms between Cameron and the only viable women in the area, Dolphin, and Seth sees Cameron's unexplainable loss of weight and hair as sure sign that the vampire is feeding on him. His warnings to Cameron, however, fall upon deaf ears. Conferring with his only remaining friend—a mummified dead baby that he found in a barn and thinks is an angel—Seth realizes that it is up to him to save his brother....

Cameron Dove: Why don't you go play with your friends?
Seth Dove: They're all dead. 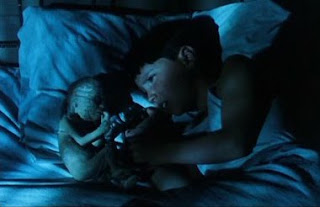 The debut film of Philip Ridley, a British artist who works in a variety of media (author, painter, filmmaker, playwright) who that very same year also supplied the script to Peter Medek’s artsy “true crime” gangster drama The Krays (1990 / trailer), much of the visual beauty of The Reflecting Skin is definitely due to the films cinematographer Dick Pope (Vera Drake [2004 / trailer] and The Illusionist [2006 / trailer]). Though filmed in Alberta, Canada, the wide-open spaces, vast grasslands and endless skies pass well for its supposed setting of 1950s sun-burnt rural Idaho. The bright sun and beauty of the setting are a strong contrast to the events of the film, which are universally bleak and appalling and offer absolutely no hope of a tolerable future, much less any sort of happiness. 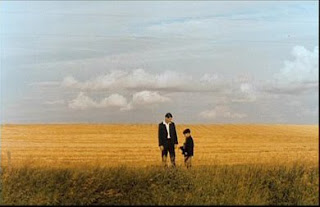 Imagine if Grant Wood had been a psychopathic, death-obsessed filmmaker instead of the gifted Regionalist painter he was; he probably would have made films like The Reflecting Skin. Search this film and give it a go—you’ll either be blown away by it or thoroughly regret having bothered to watch it, but in no way will you be apathetic by the time the final credits roll.
Posted by Abraham at 4:15:00 PM