“If you believe in something strongly enough, who's to say if it's real or not?” 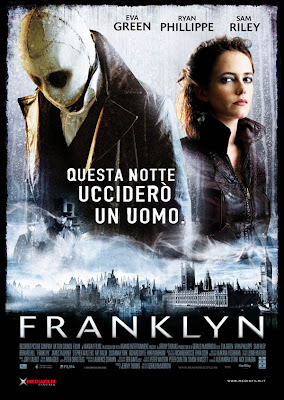 Franklyn is the debut feature-length film of its writer/director Gerald McMorrow, and what a debut it is indeed. A seemingly complication intertwining of two timelines and four protagonists, the film straddles a fascinating line between a futuristic dissonant society and modern London. In the former, society is ruled by a fascist-like government that dictates everyone must be a religious believer, though the religion can be fairly obtuse (as is pointed out early in the film, "These days, you can form a congregation simply based on washing-machine instructions"); in the latter, life is pretty much as might be expected amongst those lost souls searching for love, grounding or lost family members in contemporary London. 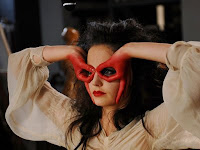 Meanwhile City is the city of the future in which a vigilante by the name of Jonathon Preest (an as-always handsome but miscast Ryan Phillippe, best remembered to life-wasters for his roles in I Know What You Did Last Summer [1997 / trailer] and The Way of the Gun [2000 / trailer]) is out to revenge the death of an 11-year-old girl killed by the hands of "The Individual," the leader of some religion. But before he can do so, he is betrayed, captured and tossed in jail. Back in modern-day London, Peter Esser (Bernard Hill of Drowning by Numbers [1988 / main theme] and both The Lord of the Rings: The Two Towers [2002 / trailer] and The Return of the King [2003 / trailer]) is wandering London searching for his lost son while a less-than-totally-balanced art student named Emilia Bryant (a beautiful and talented Eva Green of the less-than-successful 2004 version of Arsène Lupin [trailer] and, of course, Casino Royale [2006 / trailer]) regularly conducts suicide for art and the recently broken-hearted Milo (Sam Riley of Control [2007 / trailer]) suddenly runs into his childhood "friend" Sally (also played by Eva Green). A Dr. Earlle / Pastor Bone (James Faulkner) occasionally crosses the paths of the three at any given time to watch, offer advice or simply gab, but he more or less literally disappears not by but at the end of the film.

The adjectives that come to mind to describe the two halves of the whole are intriguing, beautiful, funny, depressing, whimsical, stylish, original, surprising, etc etc. Franklyn is one of those films that manages to keep you at an arm’s length even as it draws you in, forever revealing one titbit after the other even as it seems to mix two disassociated stories into an initially confusing whole that suddenly makes total sense in the final scene. Indeed, with the final scene, many small asides throughout the movie that leave the viewer going "Huh?" suddenly deserve an "Uh-huh!" (Indeed, the only "Huh?" that remains throughout the entire English production and is not in any way solved by the final scene is Ryan Phillippe's US accent.)

Disguised at the start (and presented) as a genre film, Franklyn is anything but. At the same time, it is so hard to pigeonhole that it is easy to see why it never made it to the States (or to a major international release) despite its overall high-quality. If you’re interested in a non-trashy, ambitious flick that definitely agitates outside of the norm and expectations, then you can’t go wrong with Franklyn.