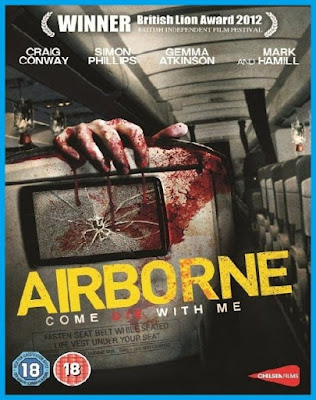 (Spoilers.) There seems to be a theme underlying this independent "horror thriller", and the filmmakers make sure you know it within the first minutes with the voiceover — voiced by the movie's international name "star", Mark "Luke 'I look like I need a drink' Skywalker" Hamill — which points out a universal fact: sometimes bad things happen to good people. And let it be known: if you are a good person, and you watch this movie, your action gives more credence to that statement. For: Airborne is a total piece of feculence, and if you watch it, you are submitting yourself to a bad thing.

The basic plot is so familiar that one can't help but feel that one has seen it before, perhaps on some ancient episode of The Twilight Zone (1959-64) or The Outer Limits (1963-65) or Ghost Story (1972-73) or Night Gallery (1969-73), to name a few familiar examples of the type of TV on which the basic plot has probably been used before. Wherever the plot came from, it was surely done better there. As written by Paul Chronnell (Dude, do the world a favor and give up scriptwriting!) and directed by Dominic Burns (a man best known for being a zombie extra in Cockneys vs Zombies [2012 / trailer] and playing "Alex" in  Strippers vs Werewolves [2012 / trailer]), Airborne is not very thrilling, not very scary, not very suspenseful, not very well acted, not very well shot, not very funny, not very enjoyable, and .... well, think of something that you like to see in a movie, and put the word "not" in front of it. As previously mentioned, Airborne is a total piece of excretion.

And that despite some nice faces that normally indicate the slight possibility of entertainment. No, Mark Hamill is not meant here, as it is generally his voice that can be found in an occasional good movie, not his face. Two less familiar names but more familiar faces that earn some whisky money in Airborne are the character actors Julian Glover (Indiana Jones and the Last Crusade [1989 / trailer], James Bond For Your Eyes Only [1981 / trailer], Mirrors [2008], Tom Jones [1963 / trailer], Quatermass and the Pit [1967 / trailer], and Theater of Death [1967 / trailer]) and Alan Ford (Lock, Stock and Two Smoking Barrels [1998 / trailer] and Snatch [2000 / trailer]), both of whom must have been desperate for a drink the day they signed the contract for this turkey. Alan Ford in particularly literally phones in his performance, recreating the obnoxious loud-mouthed boss gangster character for which is basically known. (He is surely a one-take actor, because he surely is still in character even when he fucks up.) Gemma Atkinson and her boobs — seen below, not from the movie — are also in the film, but the latter remain covered and thus she makes no impression. (Besides, who knows her outside of Great "I only did it as a protest vote" Britain?) For that matter, no one makes any impression in this movie, other than maybe the guy who bashes his head against a wooden crate until he pulverizes both. He makes an impression and then dies. But that in no way saves Airborne from being a total piece of excrement. 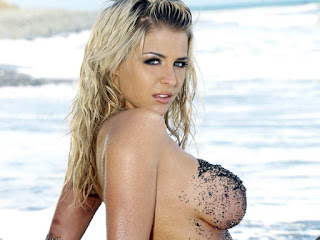 But to give acting kudos where deserved, truly special notice must be given to director Dominic Burns for possibly doing the most unconvincing American accent ever while briefly playing the slightly plump passenger Bob. (Be proud, man, you were like totally convincing as whatever it was again you were. A teacher? Child molester? Weight Watchers representative?) Luckily, as Bob is the first to disappear, one need not suffer his thespian abilities and non-performance long. (One wonders if Dominic Burns shouldn't look elsewhere for employment, like in real estate or janitorial work, for neither acting nor direction appears to be his forte. Weight Watchers representative would probably not be an option, however, going by how his clothes fit.)

One knows that the Airborne is going to strain logic when a motley, tiny gathering of a handful of passengers fly out of an empty airport at which every other flight has been canceled due to an incoming storm and the flight control room has no windows. On board is also a mysterious crate marked "Fragile", and a variety of viable red herrings so that one is not automatically sure: 1). Who the killer is, and 2). That the killer is supernatural.

Yep, Burns & Chronnell have their cake and eat it too by cooking up a narrative that includes both a natural and supernatural force behind the mounting bodycount, but fail to either present or make any of it convincing. (Some things, perhaps, might have made more sense were the sound better, but it is as crappy on the DVD as Airborne is obviously low budget.) Why, for example, after thousands of years, does the evil spirit suddenly get out of the vase it's been trapped in for centuries? Some deaths would literally mean that one character had to be at two places at the same time. The mildly Muslim-looking, sudden-replacement steward (who flip-flops unconvincingly from wimp to manly once too often) is way too cheap a trick, and for his final scene he would have had to be able to walk through walls. The love bit between the good stewardess (Gemma, maybe?) and the not funny good guy (Simon Phillips) is also a bit gagging, but at least good for a giggle. How can it be that everyone and their uncle seem to know how to fly a jumbo jet? And why do none of the shots fired ever go through the target and pop a hole in a window or something? And can planes really fly straight when someone opens the emergency hatch mid-flight? Yep, Airborne is a total piece of shite.

In the end, however, above and beyond the technical and narrative and thespian flaws, the biggest flaw of Airborne is that it isn't interesting, isn't suspenseful, isn't much of anything other than boring. And as the supposed winner of a British Lion Award at the 2012 British Independent Film Festival  — or so it proudly claims on the DVD cover, as you can see, though one could well imagine the claim is a lie — Airborne is damming evidence that: 1). The British independent film scene must be in a bad way; and 2). The jury was populated by either friends and family of the filmmakers or blind, deaf and dumb idiots. (A jury of second- or third-cousin American Republicans, maybe? It would explain everything, actually.)

In any event, be forewarned: Airborne is truly a slice of cow patty.

Has nothing to do with Airborne,
but let's hear it for Cow Patti:
Posted by Abraham at 6:33:00 PM