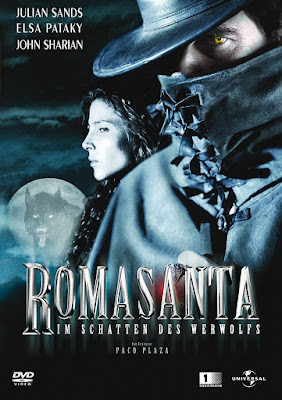 Released as "Werewolf Hunter" in the U.S., this movie is the second feature-film project of the Spaniard Paco Plaza, who went on to create the original [Rec] franchise with Jaume Balagueró, a director whose work does not normally enamor us, and with whom Plaza co-directed the excellent first installment of the franchise in 2007 (trailer), the crappy sequel [Rec]2 (2009 / trailer), and the pointless but fun [Rec]3: Genesis (2013 / trailer). He seems to have bailed for Balagueró's flogging of a dead horse, [Rec]4: Apocalypse (2014 / trailer).

In our childhood, we were big fans of those wonderfully lush if illogical period Gothic euro-horrors of the 60s full of beautiful damsels in distress who, struggling hard not to become the next dead nightgown, would (usually) survive all their trials and tribulations to see the light of day and, at the end of the film, ride off with some dull man of romantic interest. Romasanta is very much lush in color and costumes and set design and setting, not to mention often illogical, but — unlike, say, Julian Sands' other turn in costume horror that we've seen, Argento's Phantom of the Opera (1998 / trailer)* — it is nevertheless mostly successful and wonderfully entertaining for fans of costume or period horror. It also has a somewhat surprising if period-inappropriate feminist stance in that the final girl takes an exceedingly active role in the resolution of the events — far beyond that which would've in any way been possible during the period the movie is set. (She also doesn't ride off with her romantic interest, either.)

* We saw that Sands disaster, with its equally miscast Asia Argento, and hated it sooooo much we didn't even bother reviewing it. 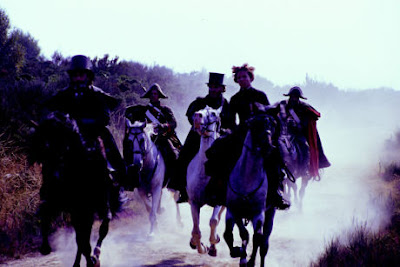 Romasanta is inspired by a true story, the same one behind the earlier and far more grimy and obscure Spanish horror flick, El bosque del lobo / The Ancines Woods (1970 / Spanish trailer). In real life, "the Werewolf of Allariz" — Manuel Blanco Romasanta (18 Nov. 1809 — 14 Dec. 1863), who is considered Spain's first known serial killer — was a travelling salesman that killed an indeterminate amount of people (he admitted 13 killings, but was only charged for nine) and made soap from their body fat. His defense was that he suffered from lycanthropy, and while he was eventually granted a reprieve from the death sentence by Queen Isabella II, it is believed that he died in prison.

Unlike in real life, where the bearded, dark and short killer of yesteryear was known to be between 1.37m [4'6"] and 1.49m [4'11"] in height), in Romasanta the travelling salesman is the blonde Julian Sands, who comes across as taller than his mere 1.80m [5'9"]. That said, if the film succeeds it is not due to his participation, for as an actor he remains for the most part as ineffectual and weak as ever, or at least he is whenever he isn't homicidal. Whenever he goes sinister or wacko, he's truly threatening and effective, but the rest of the time, especially whenever he goes nice guy or passive, his demeanor and voice becomes boneless and almost annoying. Even if this is surely a conscious thespian decision meant to convey the second side of the man, when he's boneless he is so inexpressive that instead of conveying any sort of personality — wimpy or split — he conveys an inability to act. 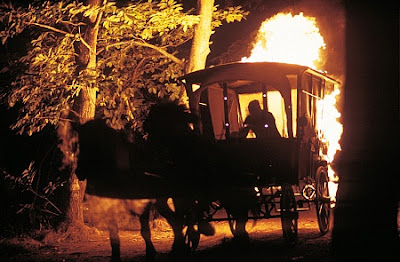 Though the movie does have flashes of the visceral — there is a brief shot of what's left of a dead deaf girl's eyes that is particularly shocking, one of many instances in which director Plaza displays a notable and more reality-bound disdain of the Speilbergian rule of not killing children — on the whole the director takes a rather subdued and atmospheric approach. In fact, Plaza often sacrifices logic and reality to the lusciousness of the production and visuals, and the excessive length of time certain scenes last also results in an uneven rhythm. (Indeed, as beautiful as the Spanish landscape might be in the movie, and as delicious as the final girl might be, some of the horse riding scenes are simply interminable.)

That the movie might suffer this tendency of beautiful visuals trumping logic is already foreshadowed in its opening segment in which Manuel Romasanta (Sands), riding through the countryside in his coach, takes on a severely injured fieldworker (but not his two companions) to transport the man to the nearest village. Not only does day go into night without a village in sight during the long ride, but the interior of the covered wagon is suddenly awash with the light of countless candles lit most definitely not by the fatally injured man. The fieldworker, oblivious to the passage of time, dictates his final words for his beloved wife to Manuel, whom we quickly learn in quick succession, is both a man of no morals and a violent killer — but whether or not he is truly a werewolf or simply a man with a severe personality disorder is long left open to question. (We know for sure at the latest during a slimy scene in which a wolf changes back into a man, but it is hard to say whether the film might not have been better had this question never been answered. And, indeed, the whole transformation might just be in the man's head.) 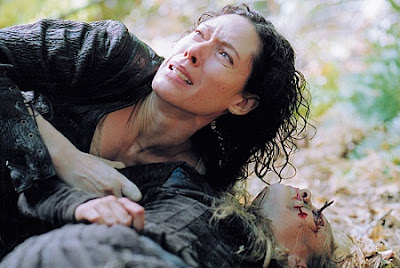 Manuel leaves a long trail of dead women and children behind him (we don't see all the murders) before finally deciding on Bárbara (Elsa Pataky of The Art of Dying [2000 / Spanish trailer], Beyond Re-Animator [2003 / trailer] and Snakes on a Plane [2006 / trailer]), a capable and beautiful woman who can obviously throw a whole farm alone on her own. She might be willing to steal her sister's man — which involves the obligatory nude and actually rather erotic scene — but definitely wants, uh, justice (?) when she learns that while she is no longer alone on the farm, she is now alone in the world. But could it be that her love is stronger than her desire for revenge? 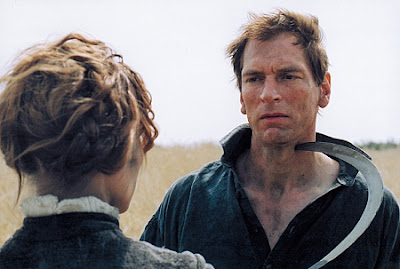 Elsa Pataky is truly effective in the movie. Yes, she is beautiful, but her effectiveness and affectiveness — shall we say presence? — goes beyond her basic babeness. Whether terrified, beset by doubt, overcome by lust, or simply determined, she conveys her state of mind and emotions far more believably than Sands, and definitely walks all over the tertiary character Antonio (John Sharian of The Machinist [2004 / trailer] and, supposedly, Lost in Space [1998 / trailer]), who, despite being US-born, displays all the conviction and believability of a badly dubbed foreign actor. (In this way, actually, he is oddly appropriate to the Euro-gothic film.)

On the whole, Romansanta is a truly uneven but, ultimately, satisfying ride. Beautiful images like flaming bonfires in front of the farmhouse or Bárbara's unplanned escape in a burning coach defy common sense but look fabulous; others, like any time someone gets on a horse or starts talking mumbo-jumbo science, are way too long. Nevertheless, the film remains intriguing, and there are enough shocks and horrific scenes — few of which can be labeled gratuitous — that anticipation and suspense is forever present. True, one gets the feeling that the filmmakers didn't really know how to end the movie, but when one keeps in mind that the true end of Manuel Romansanta is no longer known for certain (all records have been lost), the ending at least works with popular legend.

If you're a fan of wonderfully lush if illogical euro-horror films, this one's for you. And if you're not, well, in all likelihood Romansanta is the kind of horror film you can at least watch with your "woman's film"-loving other half. It truly deserves to be better known than it is. 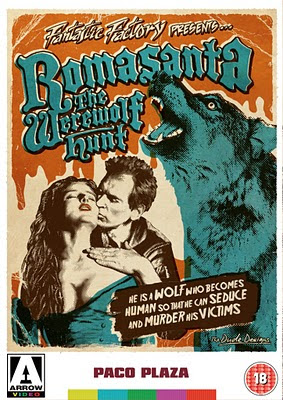