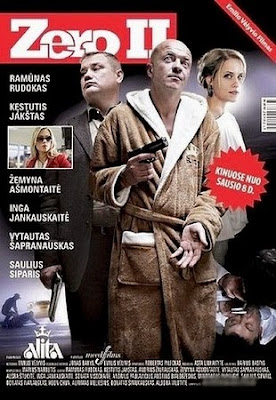 We caught this flick under the title Shoot 'Em Down, not knowing that it's actually a sequel to a Lithuanian flick made four years earlier by the same director, Emilis Velyvis, entitled Zero. Alyvine Lietuva (2006). The AKA title of this flick here, the sequel, is an obvious play upon Shoot 'Em Up (2007 / trailer), another kill-happy, bullet-ridden film which, in all truth, we have yet to manage to catch despite the presence of the babalicious Monica Bellucci. And since we haven't seen Zero. Alyvine Lietuva, either, and have no idea how this flick and that one interconnect (if at all), we'll just approach Shoot 'Em Down here as a stand-alone movie.

When Shoot 'Em Down hit the film festivals in 2010, it was picked up by the L.A.-based Epic Pictures, but it seems that they chose to lock the movie away for it has yet to get an official English-language release. Too bad, 'cause as misogynist as the movie is, it is also a relatively funny if contrived Tarantino cum Guy Richie wannabe that would be popular with the male market segment and, perhaps, less sensitive females or those who are husband-beaten. A few people must have seen it, however, 'cause director Emilis Velyvis' follow-up project, Redirected (2014 / trailer), now has some international names in it — if you count Vinnie Jones (of Slipstream [2005]) and a few other even less well-known English faces as "international", that is.

Told in a typically Tarantino non-linear fashion, Shoot 'Em Down is set in a violent world in a big city small enough that everyone seems to cross every else's paths just by chance (much like in Pulp Fiction [1994 / trailer], where in the middle of Los Angeles, with its millions and millions of inhabitants, crime boss Marsellus Wallace [Ving Rhames of Day of the Dead (2008), Zombie Apocalypse (2011), Piranha 3D (2010) and Piranha DD (2012)] just happens to opportunely cross a crosswalk directly in front of boxer Butch Coolidge [Bruce Willis], whom Marsellus wants dead). In Shoot 'Em Down, it is fairly certain that if two people who have never seen each other before meet briefly in a gas station or fast-food joint, elsewhere in the movie they'll meet again and a dead body will suddenly be involved, a dead body of someone that in all likelihood also crossed the path of some other character elsewhere and earlier in the movie. Not very believable, needless to say, but it makes for a streamlined narrative and some good laughs — and a lot of dead bodies.

Set in a world where no one is clean, the basic plot involves a drug heist, two killers contracted to get the drugs back, a bunch of people involved with a daily soap, and a variety of other people, mostly women, connected to the various testosterone-heavy men all leaving a trail of blood behind them. Everyone's paths cross bloodily and ferociously, and the bodies pile up in one tasteless and meanly hilarious scene after the other. There's nothing remotely PC or elegant about the humor in this flick, but if you're not squeamish about stuff like that you could well find yourself laughing throughout the movie.

The first sight gag in the opening scene of a cop selling some SWAT uniforms to some low-scale gangsters more or less sets the tone for how women are viewed in the movie — they're there as sex toys — and elsewhere it becomes apparent that in the world the film moves in, it's also really not that bad if you occasionally knock 'em up the side of the head. (Although one woman, at least, does take offense to the latter and takes some pretty extreme action — OK in our book.) And you know what? In this flick, it's also more or less OK to cut the silicone bags out of... uh, well, see the movie yourself to find out that.

That's about it, actually. There is no message to the movie, no subliminal text, no political statement (unless you count a blatant undercurrent of misogyny as a political statement). It's just a tight if contrived, violent and sickly funny flick that is shot well, edited well, and for the most part acted well.

Shoot 'Em Down never really stops to let you, the viewer, breath or think but instead barrels straight on down the highway and over the dead bodies until the final scene, tossing every possible tasteless, brutal, blood-spattered, and sexist sight gag and joke and body part at you as it goes. Once or twice the narrative stumbles — we really don't know why the one guy didn't emasculate the bathrobe-wearing hitman when he had the chance — but before you can really think about it the movie is already miles further. Shoot 'Em Down definitely ain't for the ladies, but the rest of you might enjoy it. (We did — our other half didn't.) One thing for sure, however, is that Shoot 'Em Down sure makes Lithuania look like the kind of place you don't want to visit — as did, for that matter, J. Jackie Baier's tragic documentary film Julia (2013). 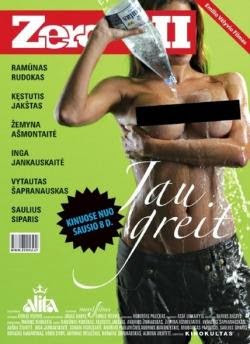