If you're a native English speaker, you probably have never heard of the German "hip-hop" band Die Fantastischen Vier (in English: "The Fantastic Four"). Anything but gangsta, and seldom overly serious, these nice boys from Stuttgart — seated below — have been making German-language music for decades. They've remained a popular staple of the German music scene since their first hit over here, 1992's Die Da?! 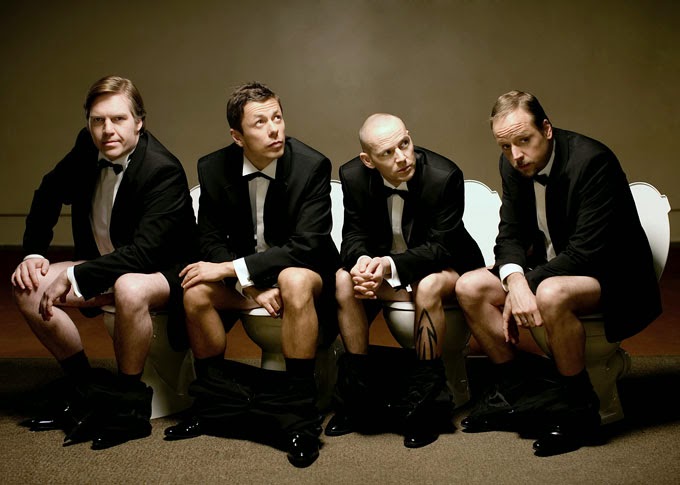 Since then, they've had a number of pop-hop hits, always German-language songs, including (among our favorites): 1994's Tag am Meer ("Day at the Seaside"), 1999's MfG (Greman abbreviation for "Mit freundlichen Grüßen", or "With Best Regards"), and 2007's Ichisichisichisich (grammatically incorrect in German as in English: "I is I is I is I") — all groovy songs with groovy videos.
But speaking of particularly groovy videos, here's the video to their single from 2010, Danke ("Thanks"). It's a regular trash short film, redone as a blackly funny music video. Here, in Danke, the dead Fantastischen Vier end up on the tables of a coroner who's one of their biggest fans — and who takes advantage of the opportunity to fulfill his dreams. The plotline is familiar, but in the films we've seen the coroner (here: German actor Florian Lukas, found in movies as diverse as Der Eisbär [1998 / trailer], Planet der Kannibalen [2001 / scene], Good Bye Lenin! [2003 / trailer], Into the White [2012 / trailer] and Grand Budapest Hotel [2014 / trailer]) usually gets infatuated with the body of a dead female. And, yes, there is the obligatory Psycho (1960 / trailer) reference, too...
An entertaining music video... and you don't even really have to understand the lyrics to enjoy it for what it is: a perverse, short horror film.
Posted by Abraham at 11:52:00 AM