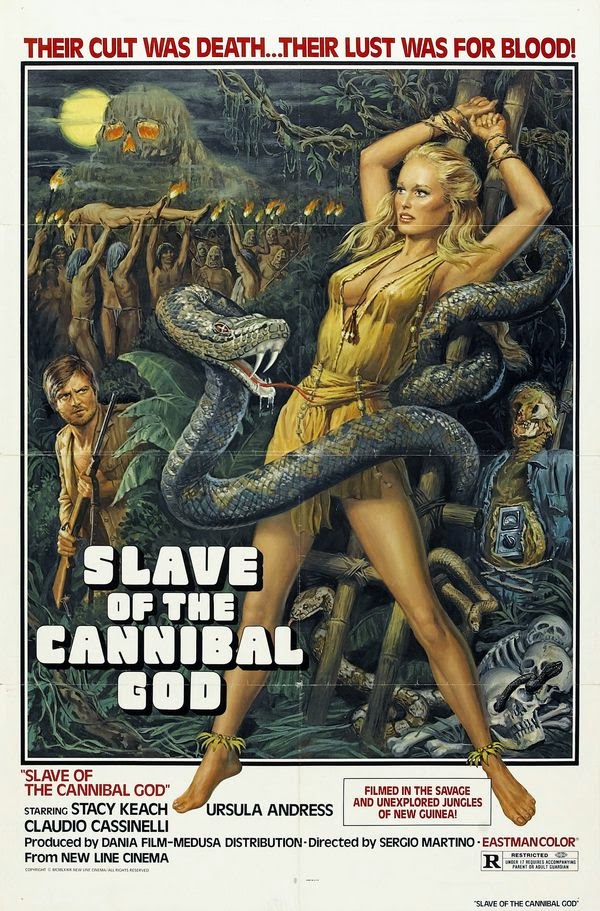 Italian title: La montagna del dio cannibal. Sergio Martino, "Italy's Unsung Exploitation King" — aka Julian Barry, Martin Dolman, Serge Martin, Christian Plummer and George Raminto — jumped onto the popular Italian cannibal film bandwagon relatively quickly; this movie here was probably the fourth or fifth one to follow the film that set the template and started the ball rolling, Umberto Lenzi's Man from Deep River (1972 / trailer). Regrettably, Mountain of the Cannibal God is neither one of Martino's best efforts nor a particularly noteworthy movie, cannibal or otherwise, and while it might be "mildly diverting" — as one of our pals described the movie after watching it with us — it is hardly imperative viewing, or in any way truly memorable.

The fault here lies not in Martino's direction, which is effective enough, and not in the dubbing, which is of typical Italo quality, but rather in the entire story, the characters, and the absolutely miscast Ursula Andress, who, at least as long as she is dressed, literally flounders through this movie looking like a lost witch. Nude or in rags, she looks like one hot 42-year-old, the age she was when she made the film, but whenever she appears dressed — which is for most of the movie — her atrocious frizzy hair, never-ending forehead, charcoal-rimmed eyes and total lack of eyebrows makes her an unnerving sight to see, if not simply extremely unappealing. This is less apparent in the opening scenes, during which she wears such obnoxious necklaces that the viewers look at them instead of her, but once those tasteless (and probably expensive) baubles disappear, one can no longer avoid noticing that Andress looks, well, as if either the 16 years since Dr. No (1962 / trailer) had not been kind to her or the on-set makeup artist hadn't liked her. 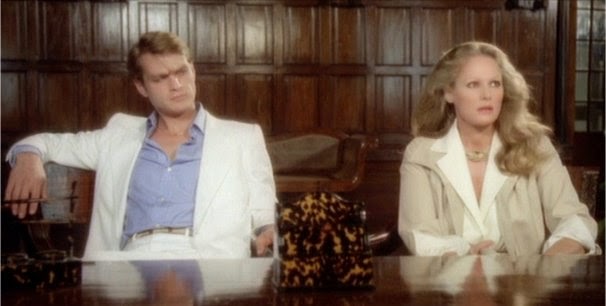 Ursula Andress plays Susan Stevenson, who arrives on New Guinea in search of her missing husband Henry. She and her slimy brother Arthur (Antonio Marsina of Keoma [1976 / trailer]) end up hiring Prof. Edward Foster (Stacy Keach of The Class of 1999 [1990 / trailer], The Hollow [2004 / trailer] and Ooga Booga [2013 / trailer]), a colleague of Henry, who is convinced that Henry probably went to the mountain of Ra Ra Me — the Mountain of the Cannibal God — and before you can say "You all gonna die" they undertake an illegal expedition to the island where, as to be expected, their native guides get killed one by one and the whities all reveal themselves as dislikable egoists with hidden agendas.

Somewhere along the way, probably because Keach's contract ran out, they hook up with the adventurer Manolo (Claudio Cassinelli [13 September 1938 — 13 July 1985*] of Fulci's Murderock [1984 / German trailer], Flavia: Heretic Priestess [1974 / trailer], and Martino's Scorpion with Two Tails [1982 / trailer], Something Waits in the Dark [1979 / Italo trailer] and Big Alligator River [1979 / German trailer]), the only one amongst them with morals, written into the story to enable a romantic subplot and a new heroic lead once Foster reveals himself to be a revenge-crazed nutcase: his hidden agenda (SPOILER) is that he wants to wipe out the entire cannibal tribe because they made him eat human flesh years earlier when he was forcefully integrated into the tribe. Really: he basically wants to exterminate an entire tribe to fix his head cold, and when he finally reveals it to a fellow character, it is met with understanding, as if genocide as an act of redemption is perfectly understandable and acceptable. Hello? 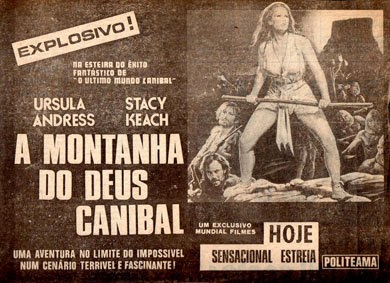 Mountain of the Cannibal God has the requisite number of shock scenes, the saving grace of the movie, even if they are once too often achieved by gratuitous real-life animal violence that does nothing to advance the plot and thus comes across as forced and mercantile. (Martino once claimed that the producers forced him to add the animal slaughtering after the fact, but it is too well integrated into the film to look added to the film as an afterthought; if it was added at all, it was probably added to the shooting script.)

The long trudge through the jungle is extremely dull, with one too many scenes of people running this way and that — amazing how no matter what happens in the entire movie, Andress' butt-ugly make-up remains perfect — and the entire bit in the village where they meet up with Manolo comes across as padding, though it is made a bit more bearable by the chocolate breasts of the village's singular beauty. The big twist revelation at the mountain in regard to one character, we must admit, was unexpected, but for that the last-minute scene of redemption is extremely hollow and unconvincing, obviously tacked on just so that the viewer can like the final survivors once again. As for the cannibal natives, well, let's just say that their traditional tribal garb seems to be white body paint and dirty, bad-sitting wigs, and despite the atrocity of their primitive acts they come across more laughable than frightening.

Mountain of the Cannibal God has some nice scenery but little suspense or tension, even when the scenes are obviously intended to have some. Most of the "money shots" — the animal killings, the emasculation, Andress being prepared to become the goddess, the sex scene in the village — fail to integrate fully or coalesce into the movie and come across as if they were decided upon due to some checklist of standard cannibal movie elements that the scriptwriters (Martino and Cesare Frugoni) were working though systematically. The gross-out factor is high, and the gore convincing, perhaps the only aspect of the movie in any way entertaining, but on the whole the movie garners more giggles and groans than it does involve or affect, and as a result it is almost instantly forgettable. 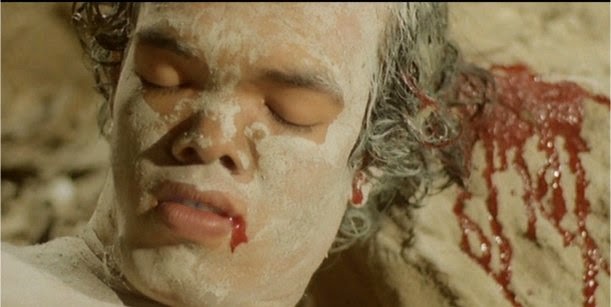 Still, it is hard to completely hate a movie that has a totally gratuitous cannibal dwarf, regardless of how quickly he is done away with. Mountain of the Cannibal God — mildly diverting, but unmemorable. 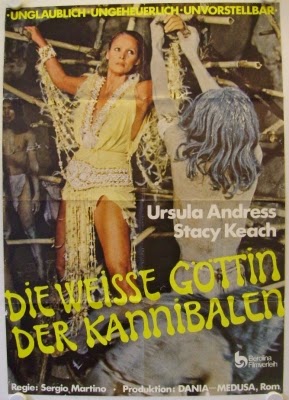 * Cassinelli made six films with Sergio Martino and probably would have made more had he, while filming Martino's Fists of Steel (1985 / Italo trailer), not died in an on-set helicopter crash. 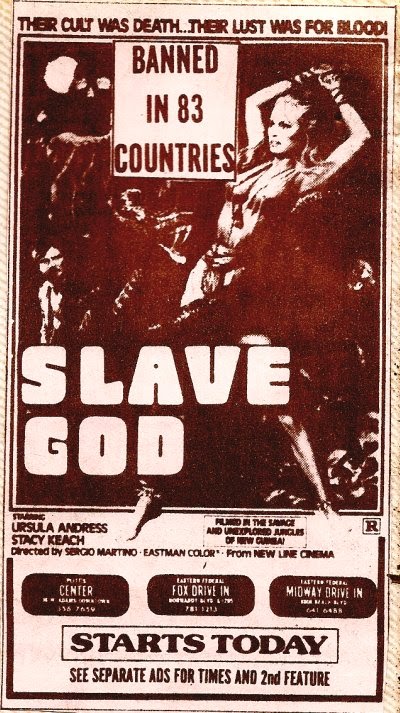 Reviewer is absolutely stupid, even the photos attached to this review show that Ursula at 43 is incredibly gorgeous.

Sure, if you like half-bald, badly dressed women with lousy make-up...