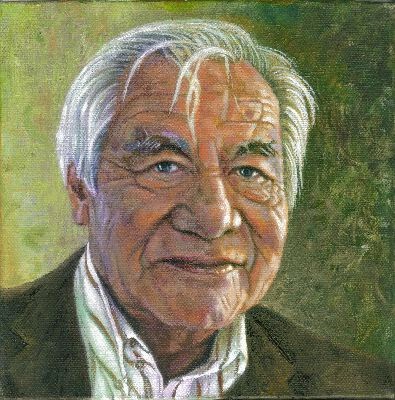 This month's Short Film of the Month Death of a Bullet, by Jimmy T. Murakami, who died this month on February 16 at the age of 80. The painting above is a self-portrait of his, and his short below is about dancing bullets and suicide.


A Japanese-American, Murakami was born in San Jose, California, U.S., on June 5, 1933. At the age of seven, he and his family were among the thousands of Japanese American interned at a segregation camp — one wonders why with the war of terror raging as it is we haven't had the brilliant idea of reinstating them for Muslims... oh wait: we have Guantanamo — and, once released, the family farm gone, they moved onto Los Angeles, where he ended up studying at Chouinard (now CalArts)... at one point while there, Chuck Jones was a fellow student.
The career that followed after graduation, and all the places it took Murakami along the way — California, New York, Japan, France, Italy, the Netherlands, England and Ireland —  is why he  was once referred to as a 'globe trotter of animation'. In the end, he was an expat who spent most of his life abroad in Ireland. (For an interesting interview, go here at Animation World Network.)

During his long and productive career — to list only the things we find interesting — he was nominated for an Academy Award for Animated Short Film for The Magic Pear Tree (1968 / full short); was the second-unit aerial director of Roger Corman's The Red Baron (1971 / German trailer); the director of the classic piece of flotsam Battle Beyond the Stars (1980 / trailer); supposedly did un-credited directorial work on another craptastic classic of Corman's, the original Humanoids from the Deep (1980 / trailer); did the "Soft Landing" segment of Heavy Metal (1981 / trailer); and made the bleak, sadly under-appreciated and almost forgotten animated movie When the Wind Blows (1986).
Worth noting is that the music to Death of a Bullet is by fellow ex-pat Sam Spence,* one of the great unknown music composers; he is best remembered as the former house composer for NFL Films and commercials. While his name is not extremely recognizable, his music tends to be. In fact, is known for being very, very, very recognizable — as in generally sounding so much like some other well-known piece that many (if not most) of his compositions can be accused of almost being plagiarized. (The music to Death of a Bullet, you may perhaps note, is of no exception.)
*He resides in Munich, Germany, and has for decades.

Also by Murakami —
the official Music Video to Kate Bush's King of the Mountain:
Posted by Abraham at 3:43:00 PM