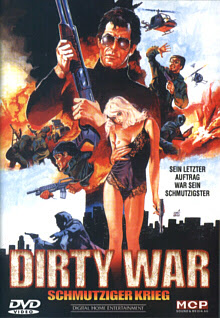 (Spoilers.) Aka Guerra sucia and Schmutziger Krieg.
We pulled this DVD out of our "DVDs from Hell" pile: a (much too high) pile of cheap DVDs that we have no idea how they ever even got in our possession. Many we simply and literally found, others were given to us by people who know our penchant for crappy flicks, while some seem to have materialized from nowhere. Like this one. War films aren't exactly our thing, and the DVD's title pretty much implies that the film would be one. In any event, we pulled it out of the pile simply 'cause we were in the rare mood for anything but a horror flick, as the last couple of horror flicks we'd seen were such disappointments we wanted a genre break. And what do you know: the film was a pleasant surprise.

Which isn't to say Dirty War is any good. It's a crappy, trashy piece of shit, actually. But not only is it not a war film, but it is also a wonderfully entertaining piece of flotsam that occasionally verges on surrealism. It kept us giggling till the end. Later, when we had the chance to do a little Internet research on this unknown and little-seen movie, we were less surprised to find out that Cannon once released the film in US grindhouses than we were to discover that hiding behind the director's pseudonym "Alfredo Casado" is no one less than the great Juan Piquer Simón, the auteur of directorial incompetence who made that craptastic classic of horror, Slugs: The Movie (1988) — which was actually Simón's follow-up project to this one. Suddenly, the enjoyable unprofessionalism and scatter-shot approach found in Dirty War made total sense.

Dirty War opens with the film's manly hero Paul (Pierre Oudry of Village Girls [1975 / sex scene] and Saint-Tropez Vice [1987 / trailer]) and some broad (Lone Fleming of The Possessed [1975 / full film in Spanish], Evil Eye (1975 / soundtrack),  Return of the Evil Dead [1973 / trailer], It Happened at Nightmare Inn [1973 / full film] and Tombs of the Blind Dead [1972 / trailer]), the latter of whom we later learn is the secretary to the  big bad guy, poking their heads out from under a bed where, in the middle of a war zone, they've been having some afternoon delight. He expresses his dreams, she talks him into working for her boss, and then we cut to a few scenes of Paul as an international man of mystery blowing up some refinery — a scene that looks like the worst of any Roger Moore James Bond climactic shootout scene but reshot using paper-mâché sets — and saving Pope John Paul II from being assassinated by assassinating the assassins.

The first ten minutes of the movie, like the whole film, jumps all over the globe between Africa, Europe (Madrid, Milan and Munich) and the USA. In the US, Paul uses a European payphone and in Europe, he has an old US pushbutton phone in his chic Munich apartment (and, oddly enough, has the same green vintage-70s kitchen that we have in real life — we bought ours on eBay). The film hops around so much that it gives the impression of being shot to accommodate the given location where the actors might be at any given time, or that the events were written around the given stock footage available (like that of the Pope in his Popemobile) and the exterior shots of the given cities. 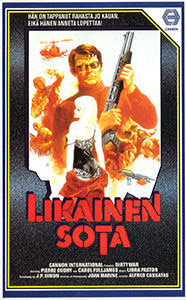 Things don't change much in this regard after Paul, tired of his violent life, wants out. As to be expected, it ain't easy to leave the organization. Paul's boss, Mr Fox (Mariano Vidal Molina of El aullido del diablo (1987 / soundtrack), The Devil's Possessed (1974 / trailer), Una libélula para cada muerto (1974 / trailer), The Corruption of Chris Miller (1973 / full film), Curse of the Devil (1973 / trailer), Scream of the Demon Lover (1970 / trailer) and El vampiro negro (1953 / first 40 minutes in Spanish), refuses to let him leave and applies pressure by having his heavies kill Paul's tasty one night stand (Alicia Príncipe of the Jess Franco films ¿Cuánto cobra un espía? [1984], Amazons in the Temple of Gold [1986] and Night of 1,000 Sexes [1984]) and, we originally think, his girlfriend Virginia (Carol Fulijames of Beaks: The Movie [1987 / fan trailer] and The Sea Serpent [1984 / Spanish trailer]). Luckily for Paul, however, the dead nude on the floor at his gal's pad is actually a visiting friend of Virginia. To save Virginia's perky breasts, Paul sends her off to NYC to stay with some Afro-American friends of his (Bob and Annie, the latter of whom is SEXY!) and then he joins Mr. Fox's next job, the robbery of uranium...

In the course of the film we get, among other fun stuff, a hilarious car chase between a VW bug and a rent-a-wreck, an exploding house that kills the Afro-American dude, and a wonderful shootout between the bad guys and a helicopter that ends up with an exploding boat. A true highpoint is without doubt the "daring" robbery of the uranium that is, for some inexplicable reason, shot at a sped-up speed and in which, just as inexplicably, all the guns sound like rayguns when shot. And then, to round the film off, we finally get to see Paul do the logical thing that he should have done at the very beginning of the film: rub Mr Fox out — an act that would have saved him a lot of trouble, not to mention the lives of friends and casual fucks, had he only done it 15 minutes into the film instead of waiting, for some unknown reason, until the end.

The events and plot of Dirty War are under-developed and badly executed, but for that the movie moves at a quick enough pace and shows a lot of delectable naked skin — the latter in almost ironic excess, as in the long stripper scene that precedes the delivery of some documents, a scene so gratuitous that it becomes laughable (Paul seems to find it funny, too, as he looks as if he's having a hard time not laughing). The death of Paul's Afro-American friend Bob, who suffers some of the worst dialogue imaginable, is also entertaining in its idiocy: Paul cold have just as easily shot the bad guy and then helped Bob escape instead of high-tailing and leaving his pal to blow up himself and the gunman. And let's not forget the car chase with its exploding rent-a-wreck and VW with automatically re-inflating tire or, for that matter, an earlier chase scene in which Paul runs back and forth to get away from the car driven by Mr. Fox's nastiest minion, Bruno (the recently departed Frank Braña [24 February 1934 – 13 February 2012] of La mansión de los Cthulhu [1992 / trailer], The Rift [1990 / trailer], Pieces [1982 / trailer], Hannah, Queen of the Vampires [1973 / trailer], The Butcher of Binbrook [1971 / trailer], The House That Screamed [1969 / trailer] and Django Kill... If You Live, Shoot! [1967 / trailer]).

Those are but few of the many visual and narrative tidbits of dilettantism that help make Dirty War enjoyable in that special, unexplainable way that director Juan Piquer Simón was such a master of. Yep, the movie might not be exciting or thrilling or suspenseful in any way, but it is fun in its own stupid way and we recommend it heartily — though we must also admit, in all honesty, it isn't quite as superlatively ding-batty as Slugs: The Movie.

One really wonders how any of the actors involved with Dirty War could keep a straight face while the movie was being made...
Posted by Abraham at 11:14:00 AM