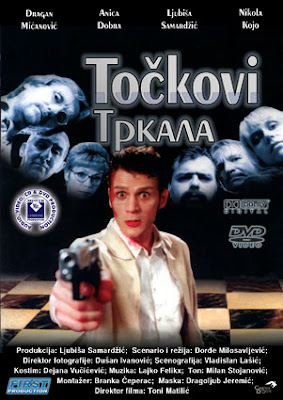 How pleasant: a totally unknown film about which we knew nothing that turned out to be an absolute gem of a black comedy. In all truth, however, you'll probably never have a chance to see Wheels — or Tockovi, as it is entitled in its mother tongue — as it does not seem to ever have had an English-language release, not even on DVD.*

It did, on the other hand, once have a German-language DVD release, and somehow that DVD found its way into our pile of films to watch — something we were only too happy to do after getting a gander of its entertaining German trailer which, unlike the trailer above, promises an insane ten-miles-a-minute roller-coaster ride of post-modern Eastern Bloc violence. In truth, the film is more of a mile-a-minute roller-coaster ride and, for all its violence and obvious influence of the School of Tarantino, Wheels still owes a lot more to Franz Kafka and the extraordinary popular delusions and madness of crowds than to the post-modern kinetics of today's Tarantino wannabes.

Do not misunderstand our last statement above as in any way implying that Wheels is either slow or boring, for it is neither. But unlike many a film, between the violence and the absurdity of the events the film-maker — Djordje Milosavljevic, making his directorial début with a script he wrote himself — takes the time to flesh-out  the framework situation and activities of the story and characters so as to explore every aspect deeply and entertainingly. And thus, between the bullets and the falling bodies he takes the time to take a look at and reveal the secrets of each character and, in turn, reveal universal the truth that we all have something to hide.

Made in 1999, Wheels has an almost timelessly retro look, a candy-colored version of the semi-50s Twilight Zone appearance once so prevalent in the Eastern Bloc that has mostly vanished today, with the possible exception of the backwaters of Belarus. The film tells the tale of a young man named Nemanja (Dragan Micanovic, also found somewhere in RocknRolla [2008 / trailer] and Layer Cake [2004 / trailer]) who, one dark and stormy night, drives back to his childhood home in the boondocks of the then Federal Republic of Yugoslavia to visit his father and borrow some money. After a brief and unnerving interlude with a hitchhiker, a scary run-in with the police and a flat tire he is forced by the rain and washed out roads to take refuge at an isolated, seedy hotel — the titular "Wheels" — where he is welcomed not by Bela Lugosi or Boris Karloff but something worse: a group of similarly stranded guests and an unfriendly innkeeper who in no short time all mistake him for a sought-after serial killer and, for reasons of their own, would prefer to deal with him themselves instead of calling in the police. Luckily, before they can finally do away with him he manages to turn the tables and get the upper hand... 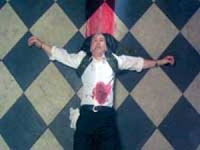 Confronted by a Kafkaesque nightmare of suspicion, innocence and guilt, fate and chance, death and survival, Nemanja's situation is comparable to that of Vladimir and Estragon in Samuel Beckett's absurdist play Waiting for Godot, for he spends most of the movie waiting for the police to finally arrive — but as is the case with Godot in Beckett's play, in Wheels the authorities never arrive. Worse, even as Nemanja tries desperately to survive the night and establish his true identity and innocence, not only do the bodies begin to fall but every corpse makes both his proclaimed innocence and identity seem all the more a lie.

Wheels is a wonderfully entertaining, low budget black comedy (if not black burlesque) with excellent film design — from the hotel to cars to the outfits worn — and at-times variable acting and oft-trenchant visual direction that offers a dead-on and humorous reflection of the nether regions of a former Eastern Bloc where no one has clean hands and everyone has something to sell, and where those rare few who really do have neither are forced by the irrationality of the surroundings to become as guilty and dirty as the rest. (Dare we conjecture that the film is a pre-war "Excuse me" for the insane horrors into which the region was soon to sink?)
Tuff doggy doo on your part that you'll probably never have the chance to see the film, for Wheels is truly is one of those unknown low budget gems that deserve both being discovered and greater renown.
*Of course, in this day and age of the Internet it is easy enough to find the film online (currently three different people have uploaded the full film on YouTube, for example), but you might have to watch it in its original language and without subtitles.

And your opinion? (Of the film, I mean.)