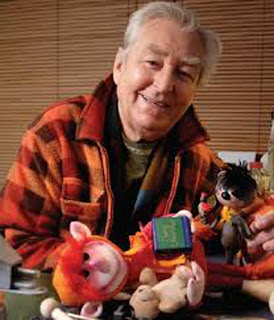 Perhaps the most popular regular feature we do here at A Wasted Life are the RIP career reviews of figures of filmic interest who have, well, gone into irreversible permanent retirement. And though they are fun to research, they also require a lot of work – in fact, they are almost Sisyphean, which is why we are considering retiring the feature. But one drunken night of revelry, we decided that if we are to do so, we should do so with a bang: currently, we are working on a "They Died in September" entry that takes a glance at all those "retirees" of the month – a concept comparable to Sisyphus deciding to use an even bigger rock than the one he usually uses.
We are not sure whether we will ever complete "They Died in September", but in the course of collecting names we stumbled upon this Hungarian animator, Ottó Foky, a man we had never previously heard of – in fact, we would hazard to guess that he is unknown in the former Western Bloc.
Born 15 June 1927 in the village of Sárhida, he died at the age of 85 on September 3, 2012 in Budapest. A 1956 graduate of the Moholy-Nagy University of Art and Design Budapest, thereafter he worked continuously in the field animation, primarily doing children's sorts and advertisements. Occasionally he would do short films that were more cross-generation in nature, and this, The Apple Thieves, is one such film.
It's an interesting little stop-motion film, lightly surreal, that is a pleasant if unexpected discovery – which is why we've decided to share it with you now, as the September 2012 Short Film of the Month. Enjoy.
The Apple Thieves
(Hungary, 1967)