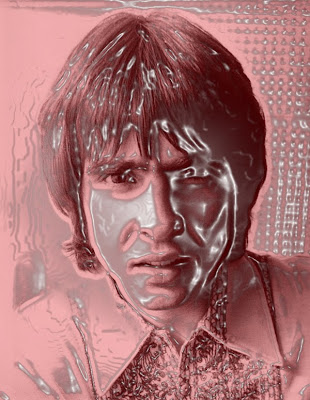 The Monkees – I'm Not Your Stepping Stone

David Thomas "Davy" Jones, born in Manchester, England, on 30 December 1945, died at the age of 66 from an apparent heart attack on 29 February 2012 in Florida.
Following his acting debut in 1961 at the age of 11 on the endless British soap Coronation Street, Jones went on to train to become a jockey before returning to the stage to play the Artful Dodger in the musical Oliver! in 1964, both in London and later on Broadway. A record contract with Screen Gems soon followed, as did a minorly successful solo album. But fame hit big time in 1965, when he was chosen – alongside Micky Dolenz, Michael Nesmith, and Peter Tork – to be a member of what is now the granddaddy of prefabricated boy groups, The Monkees, formed specifically for a weekly TV show that was originally aired from 1966 to 1968.

We here at A Wasted Life were big fans of The Monkees. We loved the Pre-fab Four's TV show when it was first aired, of the show later when it went into syndication, of their music (we bought every LP up to Instant Replay, the first one they cut as a trio without Peter Tork). All our records have long gone the way of our comic collection (which was heavy on Adams, Simonson, Ploog, Kaluta, Wrightson, Kirby and Steranko) – in other words, they disappeared into thin air – but we do have (and occasionally listen to) a Greatest Hits CD culled from the cut-out bin. Like the Three Suns, Yma Sumac, Hank Williams, Kitty Wells, It's A Beautiful Day and Grand Funk Railroad, The Monkees's best songs are as good today as they day they came out.

But as much as we love their music, it is not just for that for which we mourn the loss of the shortest member of the group. We also honor Jones for his participation in their television series, which was indeed one of the best, most creative and truly entertainingly surreal Pop Art spectacles of the 60s – any given episode is as much fun today as it was when it was originally aired, and the throwaway sight gags and jokes in passing are often both amazing and jaw-dropping. If you haven't yet watched any episodes, you should.
Head
(1968, dir. Bob Rafelson)
And to their show comes their true masterpiece, which we only discovered in our early twens while at art school: their movie, Head. Head, which flopped massively when it came out, was written and produced by Bob Rafelson and some then-unknown exploitation movie star named Jack Nicholson (the amount of input from the band members is still contended today). It is, without a doubt, one of the best drug movies ever made. Although the intention of the free-for-all, stream-of-conscious film was to destroy the group's carefully crafted TV image, all that the film actually does is up the ante of the underlying anarchy and oft-unnoticed subliminal subversiveness of the TV show by adding massive dollops of psychedelic surrealism and Situationist humor. Alongside A Hard Day's Night (1964 / trailer) and Help (1965 / trailer), Head is one of the all-time great music-group films ever made – but unlike The Beatles, The Monkees had the balls to open their film with something as radical as one of the group attempting to commit suicide by jumping off a bridge. In off-the-wall craziness and Pop-Art excess, despite the fact that Head is definitely low on sex and breasts and a traditional narrative, its closest filmic cousin is possibly Russ Meyer's Beyond the Valley of the Dolls (1970 / trailer). The two films screened together would be a double-feature made in heaven.
The soundtrack to Head, by the way, is nothing less than prime psychedelia; re-released by Rhino Records a few years ago, it is well worth procuring.
A moment's silence for David Thomas "Davy" Jones. May he rest in peace.