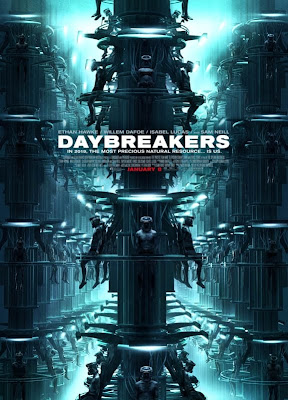 "Living in a world where vampires are the dominant species is about as safe as bare backing a 5 dollar whore."
Elvis (Willem Defoe) 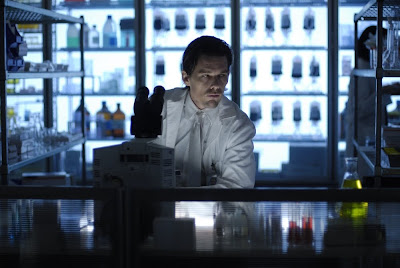 Wow! Who would have expected it! This film sucks caviar!
The Spierig Brothers first gained mild attention with their debut 2008 film, an uneven but well-shot horror comedy entitled Undead (trailer) that we here at A Wasted Life felt was less coitus than coitus interruptus – in other words, neither satisfying nor effective.
But this film, Daybreakers, their second, a sci-fi horror film, is a mighty well-made and meaty slab of Ozploitation that delivers the goods. Somewhere between their first and second film, 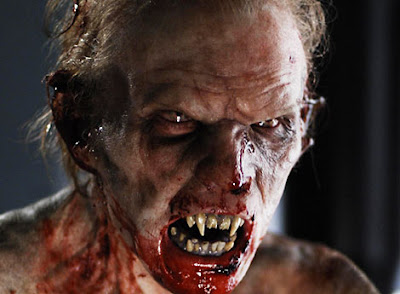 the Spiereg Brothers learned the concept of consistency and by combining that with their obvious grasp of visual showmanship made one stylistically assured genre film that is anything but coitus interruptus. Top that off with some talented actors and some nifty editing and a truly ironic, blood-engorged final set piece and you got a good night's worth of entertainment. Sure the script is a bit pedestrian and a little ragged on the edges, but it holds water well enough and not only goes from point A to B to C quickly and without losing itself, but also has an eye-pleasing visual veneer – the depressing gray and sterile atmosphere of the oppressive vampire world coming apart at the seams is not only nice eye candy, but is well-balanced by the sun-bleached cinematography of the daylight world populated but by a few remaining humans on the run.

To clarify – shades of the 1964 classic Last Man on Earth – the premise behind Daybreakers is that by 2019 a mysterious pandemic has turned most of humanity into vampires; the few humans left have long been converted into blood cows connected to milking machines that bleed them dry to feed the vampire masses. But humans – and blood – are getting scarce, and when undernourished the vampires degenerate into ugly, animalistic bat-like critters called "subsiders." Edward Dalton (Ethan Hawke) is a hematologist working on creating a blood substitute at the pharmaceutical firm Bromley Marks,

run by the calculating and evilly capitalist Social Darwinist Charles Bromley (a wonderfully despicable Sam Neill), but the results of Dalton's work are more explosive than successful. A daytime car accident leads Dalton to crossing paths with some humans in the underground, and recognized as a sympathetic bloodsucker, he, as a scientist, is drawn into their fold by the mandatory romantic-interest and group leader Audrey (Claudia Karvan) to help discover why the former vampire Elvis (Willem Dafoe, sporting an odd American accent). 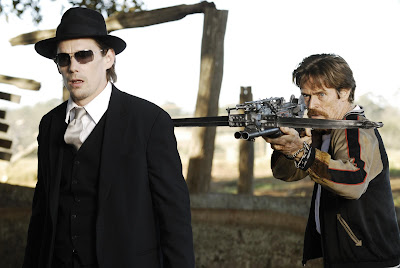 Soon thereafter, Dalton is indeed able to duplicate the cure upon himself. But not only is Dalton's human-hunting soldier brother Frankie (Michael Dorman) hot on their trail and disinterested in the cure, the capitalist Bromley is hardly willing to let his earnings drop...
The film drips with a not-so-subtle distaste of big capitalism that had long been proven as justified even before the Occupy Wall Street movement – face it, big business really doesn't give a rat's ass about you unless they can milk you dry. Likewise, the flick is full of the typical fortuitous chance encounters that ensure the hour-and-a-half running time not only fly by quickly and excitedly, 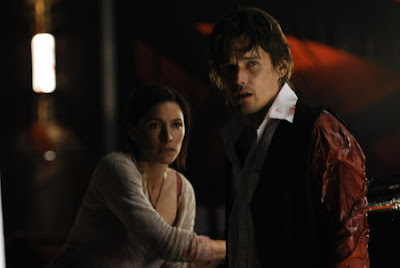 but that thrills are maintained by the required interspersion of some entertaining fountains of blood. The vampire world is well staged, the CGI usually convincing, and a few of the ironic twists are both hard-hitting and satisfying.
Most, if not all, the characters are from the screenplay writer's textbook of stock characters, but hell, Daybreakers is fun trash not Merchant Ivory, so what is important here is whether or not the genre film works and entertains – and Daybreakers does both in spades. 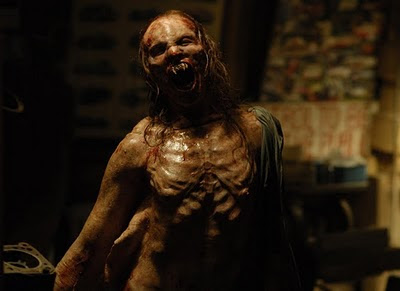 OK, Defoe has a funky accent, Hawke obviously thinks he's doing Hamlet, and Karvan is an incredibly wet-rag love interest, but the style, pacing, gore pieces and brevity of the film go a long way. Not only is Daybreakers well worth watching, but it also manages to make one curious to see what the Spierig Brothers are going to do next.
Posted by Abraham at 10:30:00 AM