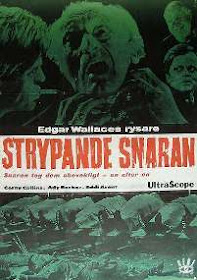 Without a doubt, Das indische Tuch aka The Indian Scarf is one of our all time favorite Edgar Wallace films either produced by Horst Wendlendt's production company Rialto Films or directed by Alfred Vohrer (the latter of whom, as one of the series's most-regular directors, made a lot of Wallace films, including some of the series's worst).

Like all the Edgar Wallace films up until Der Bücklige von Soho (1966 / German trailer), Das indische Tuch was filmed in black and white, and like some of the better Wallace films preceding it, Das indische Tuch occasionally owes as much to cheap B&W crime films as it does to the classic Expressionistic silent films of UFA Germany — not least, in part, due to the fact that it such an obviously studio-bound production with no real exterior or on-location shots. (But whereas UFA was art, Rialto was cheap entertainment.)

The artificiality of the set is particularly noticeable during the opening pre-credit sequence (leading-up to the ever-familiar and loved gunshots and voice intoning (in German) "Edgar Wallace speaking…") in which three characters are introduced and a forth, Lord Lebanon (Wilhelm Vorwerg — in the first of his only known five un-credited acting appearances, all in Rialto Wallace films), is murdered. This brief but visually intriguing prologue recalls much more the directorial style of the German master Paul Leni in our all-time favorite movie, The Cat and the Canary (1927 / full film), than it does resemble the average Vohrer film.

But then, this, the third film version to be made since 1932 of Edgar Wallace's 24th and last play, The Case of the Frightened Lady,* which he also later novelized, follows the basic structure of Leni's film much more than it does the actual original source as written by Edgar Wallace — as do many another film built around the classic idea of a group of people trapped in a house being killed one by one by an unknown aggressor.

The most famous rendering of this idea is probably And Then There Were None (1945 / trailer), the film production of Agatha Christie's novel and play Ten Little Niggers, which was later renamed Ten Little Indians for later remakes and book reprints. [A recent news report from the liberal press says that Trump has stipulated that one of his first presidential actions will be to make sure all future reprints bear the original name.] That play / novel / film was, of course, inspired by Mary Roberts Rinehart and Avery Hopwood's play The Bat, which also enjoyed multiple versions: The Bat (1926 / full film, with an indiscriminate classical score added), The Bat Whispers (1930 / full film) and The Bat (1959 / trailer). But no matter what source or model Das indische Tuch follows most closely, Vorher's film is an entertaining, highly suspenseful and blackly humorous movie featuring a love of detail and more than a handful of throwaway jokes, both visual and verbal — not to mention a hell of a body count. 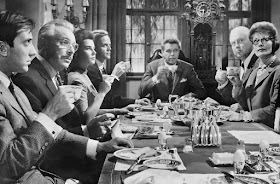 Much of the humor in this movie is supplied, as normal, by Eddie Arndt as the Butler Bonwit, but unlike much too often, Arndt's delivery this time around is extremely wry and done in passing, with the final result that he is indeed consistently funny for a change, rather than simply being the out-of-place annoyance that he is in many Wallace films. (Love that scene when, after lifting the dead Dr. Amersham's face from the plate it fell on to, Bonwit quickly and casually flips a shard of broken plate from the dead man's forehead with his finger.)

As mentioned earlier, Das indische Tuch opens with the murder of Lord Lebanon, who is strangled to death with an Indian scarf while his wife Lady Lebanon (the brilliant Elisabeth Flickenschildt, excelling as always in this, the second of her four appearances in Wallace films) is busy arguing with the shady Dr. Amersham (Richard Häussler) and his high-strung son Lord Lebanon jr. (Hans Clarin of Wartezimmer zum Jenseits [1964 / German trailer] and Das Spukschloß im Spessart [1960 / opening credits]) is busy practicing the piano in preparation for his future public début. Soon, the six heirs to the Lebanon fortune, none of whom can seemingly stand the other, are called together for the reading of the will by the lawyer Frank Tanner (Heinz Drache of Der Rächer [1960]). A "pre-testament" stipulates that they all must reside in the house for six days and six nights before the actual testament itself is read, and that those who do not remain there lose any chance of an inheritance at all.

And so the thunder storm rolls in, and it becomes a dark and stormy night, and the phone lines go dead, and the heirs are suddenly cut off from the rest of the world — and the next murder occurs! (Surprise?) Tensions mount amongst the survivors, as anybody might be murdered and anyone might be the murderer — including Tanner, who tries unsuccessfully to solve the mystery but always remains one dead body behind the murderer. Could it be Sir Hockbridge (the ever excellent Siegried Schürenberg), whose personable humor for a change masks a greedy soul? Or what about the simpleminded handyman Chiko (one-time professional wrestler Ady Berber, born Adolf Berber, of Die Tür mit den 7 Schlössern [1962 / German trailer], who died of a tumor in 1966)? Is it the condescending and son-obsessed Lady Lebanon? What about Lord Lebanon jr., who continually locks himself in his room to play the piano? Or what about the emotional, violent and seemingly heroin-addicted, illegitimately born Peter Ross (Klaus Kinski)? Is the (actually not so) beautiful Isla Harris (Corny Collins) not to be suspected just because she is a woman? And who is to say that Tanner himself isn't mentioned in the will and is trying to keep the entire inheritance to himself? Yep, red herrings and victims abound! 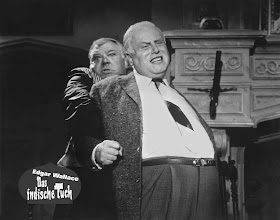 The fat guy above, by the way, plays the obnoxious American relative from Texas. He looks the part, doesn't he? (Not!) He doesn't inherit a cent, in the end.

In the long run it isn't all that hard to figure out who the murderer is in Das Indische Tuch, but it is not the mystery that makes the film so good, so much fun — in fact, it is doubtful that anyone involved with the actual production of the movie really placed any importance on the mystery itself. True, the mystery does do its job for the first half of the film, but as a whole it is much more the often over-the-top characterization, the first-rate ensemble acting, the nicely atmospheric direction, the abundance of black humor, and the numerous sight gags that makes the movie so much fun to watch again and again. (And considering that the murderer always uses the same tool of death — the Indian scarf — two or three of the deaths are also nonetheless rather visually individual.)

One minor complaint is that as good as Das Indische Tuch is, the music this time around is rather bland, despite coming from the contemporary German master of unnaturally odd musical compositions, the great Peter Thomas. He must have had a bad day at home or something…

As is normal with the Edgar Wallace films of the time, Das indische Tuch ends with a typically self-referential joke, but unlike normal, the joke is so unexpected that it actually works. Still, one can only be happy that this regular feature in the Rialto produced Wallace films eventually was dropped.

* The Case of the Frightened Lady was adapted for feature film release twice previously, both times in Great Britain. The 1932 version, The Frightened Lady aka Criminal at Large, was directed by T. Hayes Hunter (1 Dec 1884 — 14 April 1944), a man best remembered — if at all — for the early British horror classic, the once-thought-lost Boris Karloff vehicle, The Ghoul (1933 / a trailer / full film). The 1940 version was directed by George King (1899 — 26 June 1966), the director of many a Tom Slaughter film, including Sweeney Todd, The Demon Barber of Fleet Street (1936). Of all film versions, The Indian Scarf deviates the most from its original source.

For your viewing pleasure —
George King's version of
The Case of the Frightened Lady (1940):